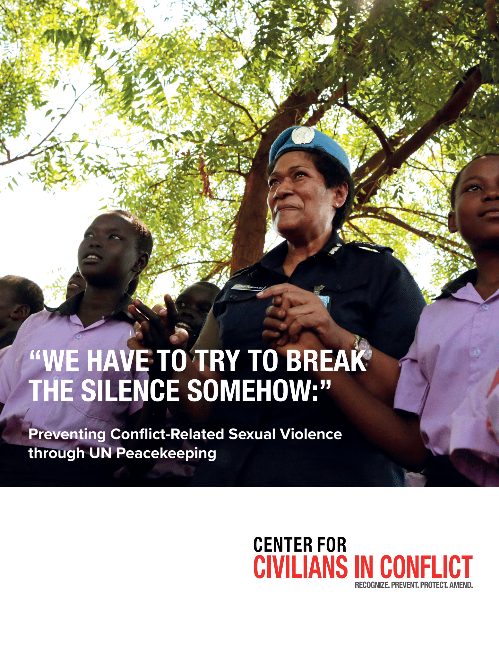 It has been twenty years since the United Nations Security Council adopted its first thematic resolution on Women, Peace, and Security (WPS) in the year 2000. This text—Resolution 1325—recognized the negative impact that violence against women has on international peace and security and identified an urgent need for peacekeeping missions to mainstream a gender perspective into their operations. Despite this recognition, the scale and brutality of conflict-related sexual violence (CRSV) in countries where peacekeeping missions are deployed remain significant. CRSV is often under-reported and less visible than other types of violence against civilians, making it more challenging for peacekeeping missions to identify and respond to than other protection threats. Missions therefore need to dedicate specialized attention to identifying, analyzing, and addressing CRSV.

With these concerns in mind, CIVIC undertook an assessment to determine what progress the UN peacekeeping missions in South Sudan (UNMISS), the Democratic Republic of Congo (MONUSCO), and the Central African Republic (MINUSCA) have made incorporating gender into their conflict analysis and prioritizing efforts to protect civilians from CRSV. CIVIC’s report, “We Have to Try to Break the Silence Somehow:” Preventing Conflict-Related Sexual Violence through UN Peacekeeping, contains our findings. Broadly, we determined that UNMISS, MONUSCO, and MINUSCA have made significant progress ensuring their reporting and analysis are more gender-sensitive. We also identified examples of good practice in Mission responses to CRSV. However, incorporating gender into conflict analysis is still too often viewed as a burden and an extra step for peacekeepers trying to protect civilians rather than being viewed as a core piece of their protection efforts. Many of the efforts to improve information collection, analysis, and response to CRSV are not yet systematic or institutionalized. CIVIC’s report makes recommendations for how to address remaining gaps and reinforce these Missions’ efforts to protect women, men, girls, and boys from CRSV.