US: Protect Peaceful Assemblies; Limit Use of Force

(New York, October 21, 2020) – City and state officials in the United States should review their laws, policies, and practices ahead of the November 3, 2020 general elections to ensure that they protect the right to freedom of peaceful assembly, five international human rights organizations said on October 20, in letters to over 3,500 mayors and city council members throughout the country, as well as to all governors.

Human Rights Watch, Amnesty International-USA, Physicians for Human Rights, and Human Rights First urged officials to prevent a repetition of recent abuses by law enforcement against overwhelmingly peaceful protests opposing systemic racism and police violence. In a separate letter to governors, also signed by Center for Civilians in Conflict (CIVIC), the organizations cautioned against the deployment to protests of forces without adequate training in crowd control, including from the National Guard.

“The United States holds itself out as a rights-respecting nation that others can look up to, but the police abuses against peaceful protesters this summer were nothing to be proud of,” said Kenneth Roth, executive director of Human Rights Watch. “When law enforcement officers in the United States commit abuses, they not only violate the rights of people at home but also undermine the US government’s ability to promote respect for rights abroad.”

The organizations have documented that between May and September, federal, state, and local law-enforcement agencies in dozens of locations across the country repeatedly interfered with the right of peaceful assembly, resorted to excessive use of force, and conducted mass arbitrary arrests in response to largely peaceful protests.

In 125 separate incidents in 40 states and the District of Columbia, between May 26 and June 5, Amnesty International-USA found police using excessive force against protesters, including beating protesters, misusing tear gas and pepper spray, and inappropriately and at times indiscriminately firing “less-lethal” projectiles against protesters.

“This summer, police in city after city committed widespread and egregious human rights violations against people protesting the unlawful killings of Black people,” said Bob Goodfellow, interim executive director of Amnesty International-USA. “Rather than being a necessary and proportionate response to any specific threat, the use of force became a matter of first resort for any form of resistance, or to enforce a hastily imposed curfew, to end an ongoing demonstration – or clear a park for a photo op. Real, systemic and lasting police reform and oversight is needed at all levels to ensure that people across the country feel safe to walk the streets and express their opinions freely and peacefully without facing a real threat of harm from the very officers that are supposed to protect them.”

At least 115 people suffered head and neck injuries when law enforcement officers shot them with kinetic impact projectiles, such as rubber bullets and bean bag rounds, during the first two months of the George Floyd protests, May 26 to July 27, according to a visual investigation by Physicians for Human Rights. The group also documented how the Portland Police Bureau and federal agents abused crowd-control weapons and obstructed medical care at the Portland protests, resulting in severe injuries and psychological trauma to both medics and protestors.

“So-called ‘less lethal weapons’ can cause severe injury, disability, and death, particularly when used in the reckless and excessive ways we’ve seen from law enforcement agencies around the country in recent months,” said Donna McKay, executive director of Physicians for Human Rights. “In cities across the United States, protesters suffered fractured skulls, broken jaws, traumatic brain injuries, and permanent vision loss. The misuse of crowd-control weapons poses a profound threat to the human body and to our democracy.”

In New York City, Human Rights Watch reported, the police planned an assault and mass arbitrary arrests of more than 250 peaceful protesters in the Mott Haven neighborhood of the South Bronx on June 4. The police “kettled,” or surrounded, protesters and legal observers, leaving them with no avenue to disperse shortly before a curfew took effect. Officers used excessive force, including with batons and pepper spray, then arrested and jailed protesters in crowded conditions with no protection from Covid-19. The operation could cost New York City taxpayers several million dollars in misconduct complaints and lawsuits.

In addition, the groups documented that law enforcement officers used crowd control weapons to target the media, legal observers, and medics who were not participating in protests, causing injuries.

CIVIC also found that while governors in over 20 states and Washington, DC, mobilized state National Guard units to support local law enforcement at protests, little evidence suggested that more than a few had provided guidance or additional training for Guard members on conducting crowd-control operations including de-escalation tactics, or on reporting misconduct by law enforcement units they were supporting.

“Military units are generally ill-trained and ill-equipped to manage demonstrations, and their mobilization in such contexts should be avoided,” said Frederic Borello, executive director of CIVIC. “If necessary, governors should only utilize forces that are trained and equipped to comply with obligations under international human rights law, notably to protect the rights to peaceful assembly and free expression, and avoid excessive use of force. All forces responding to protests should be concerned, first and foremost, with the protection of human lives and civil liberties.”

Throughout the summer, Human Rights First mobilized US military leaders and veterans, and worked to shed light on excessive use of force by law enforcement, including the use of military tactics and weapons against protesters exercising their rights.

“When political leaders treat our public square like a ‘battle space,’ inappropriately and unnecessarily using militarized tactics, weapons, or personnel to quell protests, human rights abuses are very likely to occur,” said Michael Breen, president and chief executive officer at Human Rights First. “Such tactics have no place in a democracy.”

The right to freedom of peaceful assembly is enshrined in the First Amendment of the US Constitution and international human rights law, notably the International Covenant on Civil and Political Rights (ICCPR), which the United States ratified in 1992. The ICCPR applies to all levels of government, including state and local officials.

“The freedom of peaceful assembly is a cornerstone of democratic governance and the human rights standards the United States has helped to shape,” Roth said. “City and state officials have an obligation under domestic and international law to enable peaceful assembly and ensure that law enforcement officers are trained to protect that right.”

Click here for a PDF of the full letter to governors.

For Center for Civilians in Conflict, in Washington, DC, Monica Zuraw (English): +-480-993-7223; mzuraw@civiliansinconflict.org. 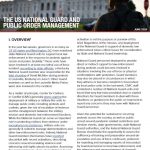