On June 24, 2020, in compliance with Section 1213 of the 2020 National Defense Authorization Act, the U.S. Department of Defense released interim policy guidance (“Interim Regulations for Condolence or Sympathy Payments to Friendly Civilians for Injury or Loss That is Incident to Military Operations”) for providing ex gratia payments to civilians harmed as a result of U.S. operations and coalition operations involving U.S. forces. The interim policy provides procedural guidance to U.S. military commanders for making ex gratia payments to individuals who have been harmed or suffered property damage, or the surviving family members of individuals killed, as a result of U.S. military operations, coalition operations involving U.S. armed forces, or a military organization supporting the U.S. or coalition. The policy includes guidance on reporting and documentation, establishes standard payment levels, and delegates roles and responsibilities for implementing the policy within the Pentagon and the Geographic Combatant Commands.

CIVIC welcomes the release of the Department of Defense interim policy on condolence payments for civilians harmed as a result of U.S. military operations and coalition operations involving the U.S. military. Financial remuneration can never replace the life of a loved one or heal physical injury, and should never be understood as an attempt to place a monetary value on life. Nor does the payment of ex gratia relieve the government of any obligations it assumes if the action that resulted in harm is later determined to have been unlawful. Finally, warring parties should always place primary emphasis on preventing harm to civilians by ensuring that proper precautions are taken during planning and operations, with adequate training, and by ensuring clear rules are in place. At the same time, the provision of condolence payments or ex gratia is one of many important ways that a party to a conflict can meaningfully express contrition for the harm it has caused, and in so doing, recognize the agency and dignity of those who are too often forgotten in war. The issuance of a formal policy on condolence payments also provides a strong example for others to follow.

CIVIC’s Executive Director Federico Borello said: “CIVIC’s founder Marla Ruzicka worked tirelessly in Afghanistan and Iraq to ensure that civilians harmed by U.S. military operations received proper acknowledgement and remedy for their loss. In the fifteen years that have passed since her death, the U.S. military has taken uneven steps to acknowledge the harm it has caused. The lack of policy and procedural guidance, and the absence of reliable complaints mechanisms, has left civilians without acknowledgement of their loss or options for remedy. While long overdue, this policy establishes a firm foundation for ensuring that more civilians are able to seek some form of tangible recognition for their loss.

“Ultimately, as with other policies, this one will be evaluated by its practical effects. In the coming days, the commanders responsible for implementing the policy can demonstrate innovation and leadership by conducting consultations with civil society as a part of assessing if and how ex gratia can and should configure in its comprehensive response to harm in their area of operations. Each commander delegated with the authority to make payments should ensure that there is a reliable means for civilians to report harm and to exercise the option of seeking ex gratia when they so desire. Payment will not be appropriate in every circumstance, but civilians themselves should make that decision.”

The policy adheres to certain parameters established by U.S. law, and as such, narrowly circumscribes eligibility for payment to civilians who are “friendly” to the United States. Commanders with the authority to implement this guidance should assume that civilians harmed by its operations meet this requirement. The interim policy also states as the principal goal of the use of ex gratia “maintaining friendly relations”, which could further limit the prospects for eligible civilians to seek and receive ex gratia payment. Given the interim nature of the policy, the Department of Defense has an opportunity to expand upon this statement of purpose by clarifying the value of acknowledging harm and respecting the dignity of those who have been affected by its operations or those of its coalition partners when the forthcoming Department of Defense Instruction on Civilian Casualties is issued.

Center for Civilians in Conflict was originally founded as the Campaign for Innocent Victims in Conflict (CIVIC) in 2003 by Marla Ruzicka, a young American activist and humanitarian who saw that civilians were being injured, killed, and forgotten by the armed parties in conflict.

After war broke out in 2001, Marla traveled to Afghanistan and Pakistan. She arrived in Kabul only a few days after the Taliban were removed from power. She noted that no one, including the U.S. military, was keeping count or helping civilians unintentionally harmed in Operation Enduring Freedom, and dedicated her life to improving the government’s acknowledgement and response to civilian casualties, advocating for the allocation of U.S government funding to victim’s assistance programs. Since her death in 2005, CIVIC has expanded its work promoting the adoption and implementation of amends policies to a number of conflict-affected areas, including Iraq, Syria, Nigeria, and elsewhere. 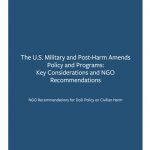