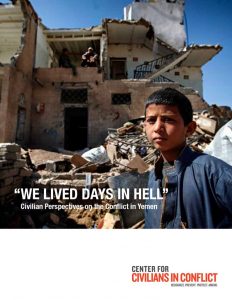 For more than two years, civilians in Yemen have been navigating survival amid airstrikes, sniper attacks, landmines, forced displacement, famine, and economic hardships. Fighting between ground forces on one side and the overwhelming use of air power on the other has taken a devastating toll on the population in a country long considered to be the least developed in the Middle East and one of the poorest in the world. Violence spread across Yemen when Houthis—a Zaydi-Shia group—took over Sana’a, the capital, in September 2014 with the help of former president Ali Abdullah Saleh’s forces. Fighting escalated when a Saudi-led coalition intervened militarily in March 2015 to reinstate the internationally recognized government of President Abdrabuh Mansoor Hadi. The United Nations (UN) estimates at least 10,000 have been killed, 37,000 injured, and more than 3 million displaced. Over 80 percent of Yemen’s 27.4 million people need humanitarian assistance.

Famine, especially in rural areas, has increased: 7.6 million people suffer from severe food insecurity and almost 2 million are malnourished. As of December 2016, parties to the conflict have not respected UN-led ceasefire agreements. This report documents patterns of civilian harm inflicted by all sides, examines civilian perceptions of the various parties to the conflict, the need to professionalize security forces, and highlights civilians’ needs and expectations in terms of protection and assistance to rebuild their lives and communities.

The report provides some recommendations to all parties to the conflict and the international community, including on key elements needed for an inclusive peace process that could help end the cycle of violence. Center for Civilians in Conflict (CIVIC) conducted research in Sana’a, Aden, Taiz, Hadramout and Mareb governorates and met with civilians, governors, security and military officials, armed group leaders, as well as community and civil society leaders.