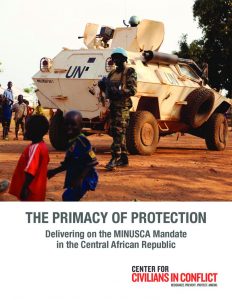 Civilians in the Central African Republic (CAR) continue to suffer from an acute protection crisis that began in late 2012 with the launch of the Séléka rebellion and ensuing violence between Séléka rebels and anti-balaka militias since mid-2013. The United Nations (UN) estimates that between 3,000 and 6,000 civilians have been killed since December 2013, though these figures are neither current nor comprehensive.

The need to strengthen the protection of civilians could not have been more evident during CIVIC’s December assessment—and it will remain critical moving forward. Although limited in presence and capacity, MINUSCA is the only actor currently able to respond to threats to civilians. The situation for civilians in CAR would be significantly worse if the mission was not deployed. This report is intended to provide constructive recommendations to stakeholders that can enhance MINUSCA’s ability to protect civilians.