WASHINGTON—The laws of war prohibit the intentional targeting of civilians. This principle, known as civilian immunity, is the cornerstone of international humanitarian law. Yet this immunity is not absolute: civilians are immune from being targeted unless and for such time as they take a direct part in hostilities. Thus, a civilian may be lawfully targeted while directly participating in hostilities.

Military commanders, government officials, lawyers, humanitarians, and academics have engaged in a heated debate over how this rule should be implemented. In their debates—primarily focused on definitions, legal obligations, and criteria for targeting—they have argued about such key questions as which activities should qualify as direct participation and when a civilian should lose and regain legal immunity from direct attack.

In all of these discussions, the views of one group have been largely absent: civilians in conflict-affected countries. For these civilians, the issues of participation and protection during war are not abstract problems but instead are a matter of life and death. As a step toward addressing this gap in the discourse, Center for Civilians in Conflict carried out the People’s Perspectives study on civilian involvement in armed conflict. This study is based on more than 250 interviews with individuals who have lived through conflict in Bosnia, Libya, Gaza, and Somalia. By shedding light on their perspectives and experiences, this study endeavors to inject civilian voices into this conversation about “the civilian”—and to ensure that this critical debate about warfare in the 21st century is inclusive of those most likely to be affected by its outcomes.

To read only the individual case studies click the links below: 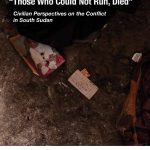 “Those Who Could Not Run, Died”: Civilian Perspectives on the Conflict in South Sudan 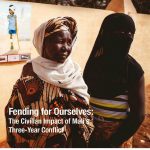 Fending for Ourselves: The Civilian Impact of Mali’s Three-Year Conflict