US Military Claims System for Civilians

In April 2007, the US military released the first-ever documents detailing individual claims for civilian casualties in Iraq and Afghanistan.  While the US military attempts to minimize civilian casualties, loss of innocent life is a reality in conflict.  Knowing civilians suffer death, injury and property loss during armed conflicts – whether in combat or merely by the presence of military forces – the question arises:  What should, or must, the US military do to address the damage caused by military operations to civilians?

Don’t Forget the Civilians in the Fight Against ISIS 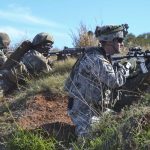