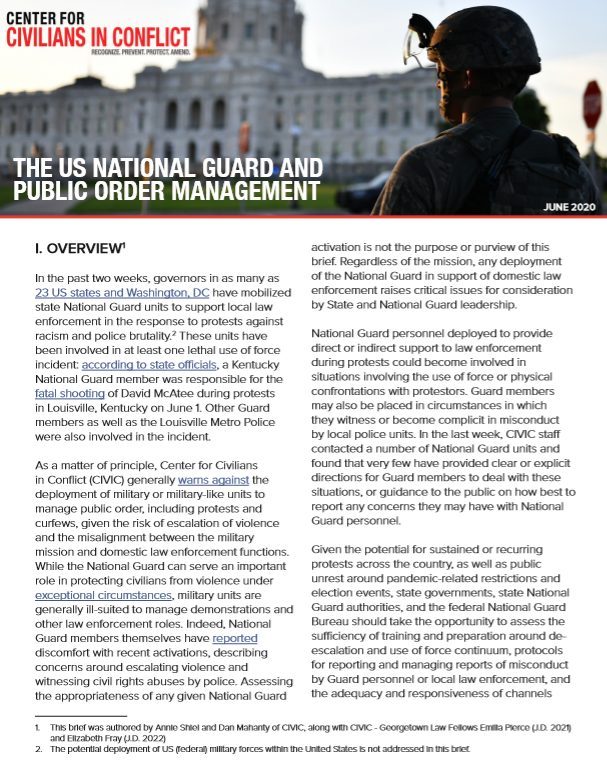 In the past two weeks, governors in as many as 23 US states and Washington, DC have mobilized state National Guard units to support local law enforcement in the response to protests against racism and police brutality. These units have been involved in at least one lethal use of force incident: according to state officials, a Kentucky National Guard member was responsible for the fatal shooting of David McAtee during protests in Louisville, Kentucky on June 1. Other Guard members as well as the Louisville Metro Police were also involved in the incident.

Given the potential for sustained or recurring protests across the country, as well as public unrest around pandemic-related restrictions and election events, state governments, state National Guard authorities, and the federal National Guard Bureau should take the opportunity to assess the sufficiency of training and preparation around de-escalation and use of force continuum, protocols for reporting and managing reports of misconduct by Guard personnel or local law enforcement, and the adequacy and responsiveness of channels by which Guard units communicate with the public. Notably, these recommendations reflect the principles that CIVIC applies to the requests we make of the U.S. military during its overseas operations.

This policy brief provides a summary of the role and authority of the National Guard in the United States, to include the rules governing the use of force; describes the processes by which incidents and allegations of human rights abuse or civilian harm are received and managed; and proposes recommendations for consideration by State and National Guard authorities and the federal government’s National Guard Bureau. This brief is partly informed by information gleaned from direct outreach conducted by the authors to representatives of each of the 23 state National Guard units that have been mobilized in response to public protests. The brief also provides a list of National Guard contacts for each state and territory.