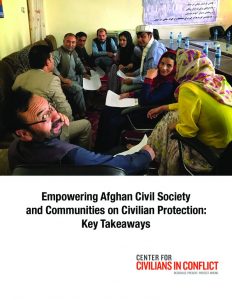 Over the past 16 years, armed conflict in Afghanistan has caused thousands of civilian deaths and injuries and has had a negative impact on the health and livelihoods of countless Afghans. The United Nations Assistance Mission in Afghanistan (UNAMA) estimates that armed conflict in Afghanistan has killed 27,481 civilians and injured 50,726 since it began tracking incidents in 2009. Taliban and other armed opposition groups (AOG) are responsible for 64 percent of these casualties, according to UNAMA, whereas 20 percent of casualties are attributable to pro-government forces, including both Afghan and international forces. Given the challenges accessing areas controlled by armed opposition groups, these numbers may be even higher than reported.