However, when determining whether and how to use military force, the government of the United States and its partners in the international community must consider second- and third-order consequences of their actions including the potential for additional harm to civilians, and how that harm may be prevented or mitigated.“The level of human suffering over the past six years in Syria is not only profoundly tragic, it is a stain on human history,” said Federico Borello, Executive Director of Center for Civilians in Conflict (CIVIC). “Condemnation is not enough;

“The level of human suffering over the past six years in Syria is not only profoundly tragic, it is a stain on human history,” said Federico Borello, Executive Director of Center for Civilians in Conflict (CIVIC). “Condemnation is not enough; real action is needed by governments and the UN Security Council to hold those responsible accountable, to put pressure on the warring parties to end the bloodshed, and to end the assault on civilians.”

Likewise, the Russian Federation, as a member of the UN Security Council and militarily supporting the Syrian government, has a responsibility to uphold its commitment to international law and not aid and abet unlawful attacks on civilians. In that light, CIVIC urges the Russian Federation to pressure the Syrian government to end all indiscriminate attacks on civilians and to meaningfully participate in the UN-led Geneva talks on ending hostilities.

While the US has said the attack on the Syrian air base was a singular event, CIVIC hopes it will lead to a renewed and meaningful push for a diplomatic resolution to the Syrian conflict.

“And given President Trump’s concern for the children of Syria, we call on him to rethink his opposition to allowing Syrian refugees into the United States,” Borello added. “These civilian men, women, and children are fleeing exactly the chemical terror he responded to last night. They deserve compassion, protection, and refuge.” 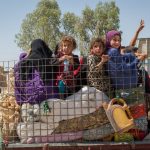