TRIPOLI, LIBYA—Abandoned weapons that were once part of Muammar Qaddafi’s vast arsenal threaten civilian lives in Libya, according to a report released today by Harvard Law School’s International Human Rights Clinic (IHRC), in partnership with CIVIC and the Center for American Progress.

Explosive Situation: Qaddafi’s Abandoned Weapons and the Threat to Libya’s Civilians documents the risks posed to civilians from the extensive stockpiling and spread of the former dictator’s munitions following the 2011 armed conflict. Based on in-country investigations, the report calls on Libya to immediately secure or destroy unstable stockpiles of weapons, and with international support, set out to clear munitions, educate the population about risks, and assist victims.

“These weapons may have been abandoned, but their ability to harm civilians remains intact,” said Bonnie Docherty, senior clinical instructor at IHRC and leader of the research team.  “We’ve seen firsthand the risks they pose to ordinary Libyans and how they urgently need to be secured or destroyed before they can harm another civilian.”

While previous reporting has focused on the problems of international proliferation, Explosive Situation examines how abandoned weapons endanger civilians within Libya. Qaddafi left an arsenal of tens of thousands of tons of weapons, ranging from bullets and mortars to torpedoes and surface-to-air missiles. The report focuses on four major challenges for the transitional government of Libya: stockpile management, clearance of munitions, risk education, and victim assistance.

International deminers told the team that the scale of the problem overshadows what they have seen in other conflict and post-conflict zones.

“Arms are spilling out of hundreds of inadequately secured bunkers,” said Nicolette Boehland, an IHRC researcher for the report currently in Libya with CIVIC. “Other weapons have spread across the country to militia stockpiles in urban centers, museums, fields, and even homes.”

The report identified several specific areas of risk, including:

The report finds the weak and transitional Libyan government has taken a limited, at times non-existent, role in the management and clearance of abandoned ordnance; there is no national strategy and confusion within the government about which agency has jurisdiction over the problem. In addition, the transitional government has provided virtually no support to UN and non-profit organizations that have done most of the work on the issue. According to legal principles and international standards, however, Libya bears primary responsibility for addressing the abandoned ordnance problem and should put in place a national plan to reduce the threat to civilians.

“The recent election of a new government provides Libya an opportunity for a fresh start,” said Docherty. “The ordnance problem is not an easy one to fix, but with assistance from other countries, the new government can respond to the abandoned weapons situation and better protect its people.” 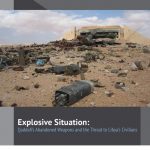 Explosive Situation: Qaddafi’s Abandoned Weapons and the Threat to Civilians