WASHINGTON, DC—Campaign for Innocent Victims in Conflict (CIVIC) today applauded the Pakistani Government’s decision to compensate the families of civilians killed or injured in a US drone strike in North Waziristan on 17 March 2011.

“Drone victims have been all but ignored. Before this pledge of compensation, civilian victims received nothing for their losses,” said Sarah Holewinski, CIVIC’s executive director. “That injustice is clear if you consider that in some provinces, civilians are offered compensation if harmed by ground forces or airstrikes. The weapon that caused the harm should not dictate what amends are made.”

On 17 March, a US drone strike in North Waziristan reportedly killed 12 Taliban militants and 39 civilians, though the exact numbers remain unclear. Pakistan’s civilian and military leaders have condemned the strike, demanding an apology and explanation from the US. Meanwhile, a Pakistani government representative traveled to the area on 24 March to offer an apology to the victims and two days later, a Pakistani tribal administration official announced that a compensation package of three hundred thousand rupees (approximately 3,500 USD) would be paid to each of the 39 families of victims killed in the strike; 100,000 (approximately 1,200 USD) rupees would be paid to six injured civilians. While US officials have disputed the number of civilian casualties resulting from the strike, the US Special Representative for Afghanistan and Pakistan, Ambassador Marc Grossman, expressed regret for any civilian casualties resulting from any US operations on 27 March while speaking to media in Brussels.

Some Pakistani provincial authorities provide compensation for civilian deaths and injuries, as well as housing destruction, resulting from armed conflict. Previously, this compensation program did not extend to drone victims. The Minister of the Interior recently announced a new program to assist war victims across the county, though there is not evidence to suggest this program has been created. CIVIC’s research, detailed in the report Civilian Harm and Conflict in Northwest Pakistan, shows that drone victims hold both the US and Pakistan accountable for harm, and expect compensation both as a gesture of regret as well as to assist with immediate socioeconomic losses. CIVIC’s research further shows that Pakistani civilians consider drone strikes to be relatively accurate, resulting in a burden on any victim to prove to their community that they were harmed unjustly. Compensation is tangible recognition of no wrong-doing and helps clear a family’s name.

“The Pakistani Government did the right thing here, but it can’t be a one-off effort,” said Holewinski. “Compensation for drone victims is culturally appropriate and dignifies families who have lost so much. It should be standing policy.” 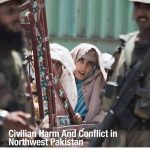