WASHINGTON, DC—Swedish diplomat and human rights advocate Thomas Hammarberg joined the board of Center for Civilians in Conflict (CIVIC) today, adding decades of experience in defending human rights around the world to CIVIC’s mission of strengthening the protection of civilians caught in conflicts. 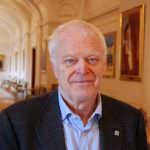 “The addition of Ambassador Hammarberg to CIVIC’s strong Board is a tremendous gain for our organization,” said CIVIC’s Executive Director Federico Borello. “His fierce belief in the dignity of every man, woman, and child to live free of threats to their lives has been demonstrated in his work from Cambodia to the Middle East. His long experience with the Council of Europe, the United Nations, and governments will greatly benefit CIVIC’s goal of working with these institutions to ensure better protection for civilians.”

CIVIC calls on and advises international organizations, governments, militaries, and armed non-state actors to adopt and implement policies to prevent civilian harm. When civilians are harmed CIVIC advocate for the provision of amends and post-harm assistance. CIVIC brings the voices of civilians themselves to those making decisions affecting their lives.

“I’m honored to join CIVIC’s board and hope I can help the organization as it continues its vital work,” Hammarberg said. “As conflict and violence show no sign of abating, protecting civilians must be a priority for every government and international institution involved. CIVIC’s unique approach of blending research, advocacy and technical assistance to implement pragmatic solutions to these problems needs to be supported and strengthened, and I will play my part trying to make sure that happens.”

Background on Amb. Hammarberg:
Thomas Hammarberg is currently chairing the Swedish Commission against anti-Roma sentiment. He has previously served both as an EU Special Adviser on Constitutional and Legal Reform and Human Rights in the Republic of Georgia and as UN Senior Expert on Human Rights in Transnistria. Prior to this, he held the post of Council of Europe Commissioner for Human Rights in Strasbourg from April 2006 through March 2012 and served as Secretary-General of the Olof Palme International Center (2002-2005).

In addition to the positions listed above, Mr. Hammarberg has served as Regional Adviser for Europe, Central Asia, and the Caucasus for the UN High Commissioner for Human Rights (2001-2003), and acted as the Swedish Prime Minister’s Personal Representative for the UN Special Session on Children. Under Kofi Annan, the ambassador represented the UN Secretary-General for human rights in Cambodia. He also has worked with the Refugee Working Group of the multilateral Middle East Peace Process.

Finally, he is Honorary Chairperson of Mental Disability Advocacy Centre, an international NGO that advocates for the rights of children and adults with intellectual disabilities or psycho-social disabilities.