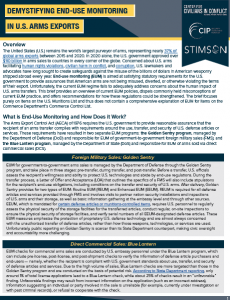 The United States (U.S.) remains the world’s largest purveyor of arms, representing nearly 37% of global arms exports between 2015 and 2020. In 2020 alone, the U.S. government approved over $110 billion in arms sales to countries in every corner of the globe. Concerned about U.S. arms facilitating human rights violations, civilian harm in conflict, and corruption, U.S. lawmakers and advocates have long sought to create safeguards against the misuse of the billions of dollars in American weaponry shipped abroad every year.

End-use monitoring (EUM) is aimed at satisfying statutory requirements for the U.S. government to provide assurances that American arms are not being misused, diverted, or otherwise violating the terms of their export. Unfortunately, the current EUM regime fails to adequately address concerns about the human impact of U.S. arms transfers. This brief, “Demystifying End-Use Monitoring in U.S. Arms Exports“, provides an overview of current EUM policies, dispels commonly held misconceptions of current EUM practice, and offers recommendations for how these regulations could be strengthened.