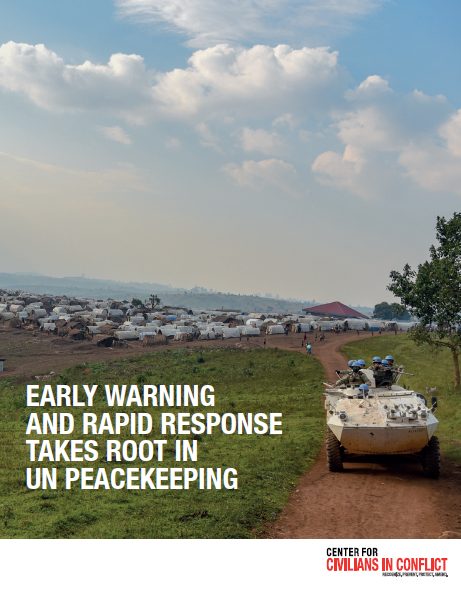 In 2010, approximately 200 combatants from armed non-state groups, as well as deserters from the Congolese army, attacked civilians in Walikale territory in the Democratic Republic of the Congo (DRC). Over the course of four days, combatants systematically raped at least 300 women, 55 girls, 23 men, and 9 boys. A UN investigation found that the violence occurred within reach of a company operating base (COB) of the UN peacekeeping mission in DRC (MONUSCO). The investigation further observed that the COB did not have adequate staff to engage with the local population, and notably found that peacekeepers were unaware of “proactive protection and warning techniques that could have maximized their capacity to intervene when the attacks took place.”

The mass rape in Walikale was one of a number of incidents of large-scale violence in the DRC and other UN peacekeeping contexts that prompted peacekeepers, the UN Secretariat, UN Member States, and other stakeholders to increase efforts to ensure that UN peacekeeping missions had the capability and willingness to prevent and rapidly respond to threats of violence against civilians. Ten years later, there is widespread recognition of the importance of missions’ capacity to identify, analyze, and respond to imminent and emerging protection threats—a process referred to as “early warning and rapid response” (EW/RR). However, while there have been notable innovations over the past decade, policy and guidance on EW/RR in UN peacekeeping remain in a nascent state.

Based on CIVIC’s past research in the Democratic Republic of the Congo, South Sudan, Mali, and the Central African Republic, as well as secondary sources, CIVIC’s new policy brief, Early Warning and Rapid Response Takes Root in UN Peacekeeping, aims to raise awareness about new efforts to strengthen EW/RR policy and practice in the context of UN peacekeeping. The brief discusses key components of effective EW/RR, including mobility, consistently engaging with local communities, and linking gender-sensitive threat assessment and analysis to planning and decision-making. The brief also provides an overview of the evolution of EW/RR in UN peacekeeping and discusses lessons learned drawn from secondary research on early warning in situations of armed conflict.