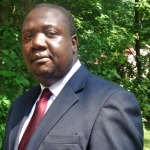 Tawanda Mutasah is Vice President, Global Partnerships and Impact at Oxfam America, where he oversees global programs and partnerships. He formerly served as a member of the World Council of Churches Study Group on Faith, Justice and Ecumenism convened by Reverend Ntoni-Nzinga.

From 2014 to 2019, Tawanda was Senior Director of Law & Policy at the International Secretariat of Amnesty International, where he provided global leadership in the formulation and articulation of the human rights movement’s substantive international humanitarian law and human rights law, policies, legal positions, and litigation strategies.

Before that, Tawanda was Global Director of Programs at the Open Society Foundations, where he oversaw the work of international thematic programs. His other previous roles include Executive Director for the Open Society Initiative for Southern Africa, and Southern Africa lead for policy, advocacy and media for Oxfam Great Britain. He has also in the past served as a governor of the Coalition for Dialogue on Africa. Widely regarded as an innovative social justice leader, he is, among several other initiatives, credited with the founding of the Southern Africa Litigation Center, as well as the Southern Africa Resource Watch.