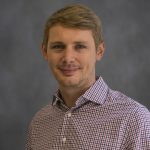 Seán Smith is CIVIC’s Peacekeeping Researcher in Mali. He is currently researching MINUSMA’s procedures for evacuating wounded peacekeepers and other casualties to hospital. His previous research has focused on how MINUSMA processes and responds to early warnings of threats of violence against civilians, as well as how critical gaps in MINUSMA’s air assets affect the mission’s ability to protect civilians. He also shapes CIVIC’s advocacy priorities on MINUSMA and its protection of civilians’ responsibilities during the annual renewal of the Mission’s mandate by the UN Security Council.

Before joining CIVIC, Seán spent more than five years as a political risk analyst focusing on countries in the Sahel and West Africa, producing reports for multinational businesses to identify the degree of political, economic, regulatory and security risks they might encounter when operating in the region. He also led a series of research projects in Mali for Transparency International’s Defence and Security program and has spent extended periods working or studying in Burkina Faso and Mauritania.

Seán holds an MSc with Distinction in African Politics from the School of Oriental and African Studies in London, where he undertook research on the UN peacekeeping mission in Mali, and a BSc (Hons) in Political Science and Economics from the University of Bath.