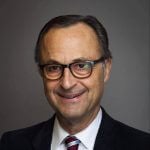 Maj. Gen. (Ret.) Patrick Cammaert has served in Cambodia as Sector Commander for UNTAC, in Bosnia-Herzegovina as Assistant Chief of Staff for UNPROFOR, in Ethiopia and Eritrea as a Force Commander for UNMEE, in the Democratic Republic of Congo as General Officer Commanding the Eastern Division for MONUSCO, and at the United Nations as Military Advisor to the Department of Peacekeeping Operations (DPKO). Since his retirement from the Royal Netherlands Marine Corps in 2007, Cammaert has advised the senior management of the DPKO, the UN Development Programme, and UN Women on Integrated Training Development, the protection of civilians from the threat of physical violence, and sexual gender-based violence in armed conflict, respectively. Other responsibilities have included carrying out UN fact-finding/assessment and evaluation missions in the Democratic Republic of Congo, Lebanon, Sudan, Haiti, Liberia, Chad, and Sri Lanka. He led the UN Secretary General’s Board of Inquiry for certain incidents in Gaza in 2014. Cammaert is also a regular senior mentor at UN Senior Leadership Courses and at Intensive Orientation Courses for new force commanders. In addition to CIVIC, Cammaert sits on the board of the Mukomeze Foundation, the Georgetown Institute for Women, Peace and Security, and the Roméo Dallaire Child Soldiers Initiative. In 2015, he was a member of the High Level Advisory Group for the global study on UNSCR 1325.

Cammaert graduated at the Dutch Higher Command and Staff College and the Top Management Course at the Armed Forces War College in The Hague.

Image courtesy of
Go to Top