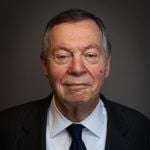 Aryeh Neier is president emeritus of the Open Society Foundations. He was president from 1993 to 2012. Before that, he served for 12 years as executive director of Human Rights Watch, of which he was a founder in 1978. He worked 15 years at the American Civil Liberties Union, including eight years as national executive director. He served as an adjunct professor of law at New York University for more than a dozen years and has also taught at Georgetown University Law School and the University of Siena (Italy). Since 2012, he has served as Distinguished Visiting Professor at the Paris School of International Affairs of Sciences Po.