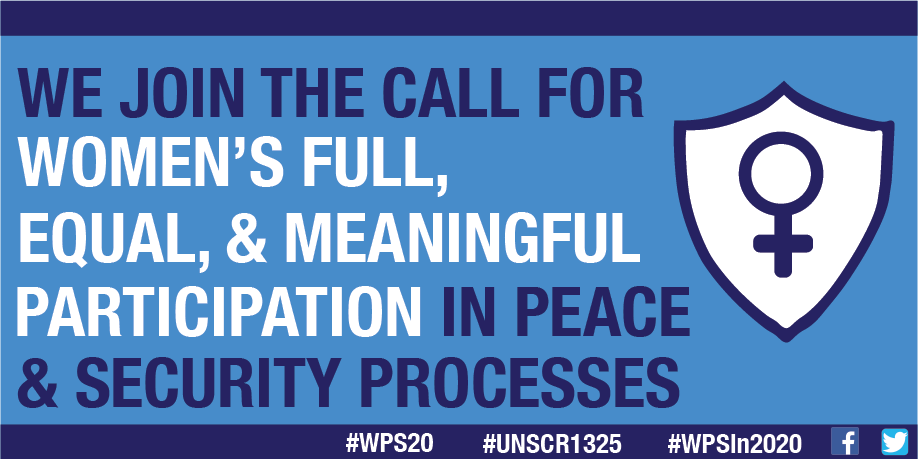 October 31, 2020 marks the 20th anniversary of United Nations Security Council Resolution 1325 on Women, Peace, and Security. This resolution was the first of its kind to acknowledge that women are uniquely impacted by armed conflict and play an important role in conflict resolution and peacebuilding. This open letter, available in Arabic, English, French, Spanish and Russian, was sent to all UN Member States on behalf of 558 civil society organizations across 102 countries in advance of the Security Council Open Debate on Women, Peace, and Security (WPS). The letter calls on the UN and Member States to prioritize women’s participation and fully implement the WPS agenda.

Twenty years ago, the architects of Resolution 1325 created history, not only by recognizing the brutal and disproportionate reality of conflict for women and girls around the world, but also by recognizing the importance of their equal participation in all aspects of peace and security. Yet reflecting on these founding principles of the Women, Peace and Security (WPS) agenda, it is clear that while there has been some progress, these words have remained rhetoric rather than lived reality for the 264 million women and girls living in conflict across the globe.

Among the statements delivered by the over 138 women civil society leaders from 32 countries to the UN Security Council so far, women’s equal participation has been a central demand. You have heard accounts of how women in North Kivu demanded their right to participate in the peace process in the Democratic Republic of the Congo, only to be told that there were “only two parties in the conflict,” and that women were not one of them; from Afghan women calling on the international community to stand by them and ensure that their rights would not be traded away for a peace deal; and from Syrian, Yemeni and Sudanese women speaking in one voice about how no democratic future in their countries is possible without women’s equal participation. Women civil society have also called for greater inclusion and representation of all groups, including those most marginalized — for example, of ethnic communities across Myanmar; of Afro-descendant, Indigenous, rural and LBTIQ women in Colombia; and of Palestinian women, who have lived through the world’s longest occupation.

Their collective message has been clear: formal peace processes have systematically failed to include women, and in doing so, have replicated the inequality and discrimination that caused conflict and violence in the first place.

We have 20 years’ worth of evidence of the causes and consequences of gender inequality and women’s exclusion. Seventy-nine percent of armed conflicts have taken place in contexts with high levels of gender discrimination and research has repeatedly confirmed that gender inequality is a root cause of conflict. In addition, the consequences of excluding women in peace processes are equally evident in conflicts across the globe: the eight peace agreements in Central African Republic adopted in as many years and the nine peace initiatives adopted in Libya in the last five years both failed to meaningfully include women; both conflicts continue to deteriorate. We have seen similarly exclusionary processes in contexts like Haiti, Iraq and Somalia, leading to the same conclusion: processes that fail to include all members of society result in agreements that do not reflect their priorities and rights, setting the stage for future conflict.

The goal of the WPS agenda is sustainable peace and security for all people; preventing conflict and ensuring that peace lasts are therefore the very reasons for inclusivity and the full, equal and meaningful participation of women in all their diversity.

Full, equal and meaningful participation means direct, substantive and formal inclusion of diverse women so that they can influence the outcome of negotiations and other processes and their implementation. Participation without the ability to influence the outcome is not participation, it is observation. Ensuring meaningful participation requires dismantling systemic gender inequality and discrimination; addressing barriers to participation, including patriarchal structures, sexual and gender-based violence and lack of access to healthcare, and the inaccessibility of information about, communications within, and spaces where peace processes take place; and proactively ensuring that diverse women are included.

Women human rights defenders, especially women land and environmental defenders, peacebuilders and civil society today face increasing repression around the world — the killing of women activists in Colombia increased by almost 50% in the space of one year, and the well-documented and systematic repression of women who speak out against warring parties in countries like Yemen and Libya continues to be both a symptom and a leading cause of closing civic space in these contexts. Threats and attacks on human rights defenders and peacebuilders are unacceptable and serve as a deterrent to their participation and leadership, especially in contexts where women must already overcome cultural, political, economic or other barriers to entering public life. It is therefore essential that their integral, independent role in promoting human rights, preventing conflict and ensuring peace is recognized and defended.

On the 20th anniversary of the adoption of Resolution 1325, we join our voices with those of women leaders and activists around the globe to reiterate the principle at the foundation of the WPS agenda — nothing less than the full, equal and meaningful participation of women in all aspects of peace and security.

We agree with Secretary-General Guterres that “women’s inequality should shame us all,” and welcome his commitment to “do everything in [his] power to make sure women are represented in all decision-making at the United Nations, including in peace processes.” As the international community takes its next steps to address new challenges to peace and security, including climate change and public health crises such as COVID-19, it is critical that all processes prioritize women’s participation.

We urge all Member States, the UN and international leaders to commit their full political support to making women’s direct and formal participation a requirement in all UN-supported peace processes and take all possible steps to ensure women’s full, equal and meaningful participation in all peace and security processes.

Women’s direct and formal participation can be achieved by:

2020 has already been a year like no other, resonating with the calls of powerful social movements demanding racial justice and calling for deep, structural change to address the many inequalities laid bare by an unprecedented global pandemic. The world is changing and all international actors, including the Security Council and the UN, must change with it — now more than ever, exclusion of any kind is unacceptable, especially in matters of peace.

The road to sustainable peace and gender equality requires structural transformation, respect for human rights, collective responsibility and accountability, and inclusive, meaningful participation of conflict-affected communities. In October 2000, in advance of the adoption of Resolution 1325, feminist movements and advocates for women’s rights around the world called for recognition of the work done by women peacebuilders and for their equal right to participate in all peace processes, knowing that equal representation provides a critical foundation for achieving these goals. 20 years ago, this Council took a bold first step by adopting Resolution 1325. Today, we call on you to ensure that the agenda we have collectively built is implemented in full.