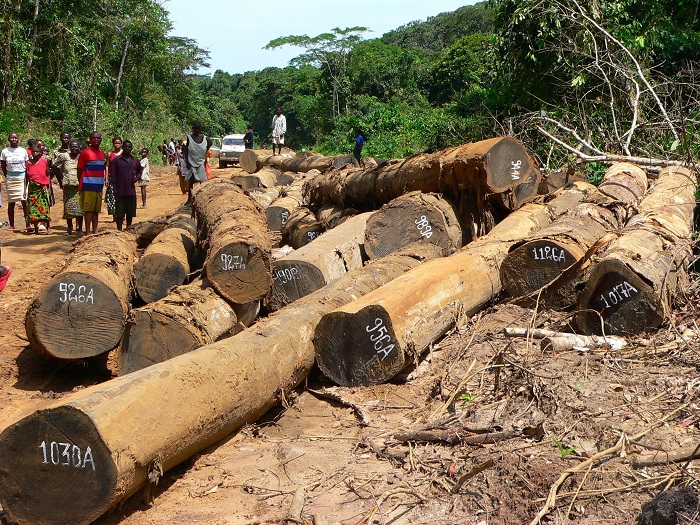 In 2022, CIVIC partnered with the Institute of Security and Global Affairs at Leiden University to examine contemporary challenges in the protection of civilians. Bachelors degree students in the integrated security studies project course divided into teams, and developed policy briefs for a range of institutional partners, including CIVIC. The winning brief is summarized in the below post, which examines the implications of the growing timber industry on conflict and the protection of civilians.

“If a tree falls in a forest and no one is around to hear it, does it make a sound?”

In Africa, thousands of trees are felled each year due to illicit logging practices. The effects may not be heard in the western world, but its impact reverberates throughout Africa. The harm logging poses to local communities makes it necessary to take measures that ensure the well-being and safety of local civilians.

As part of a co-op program at Leiden University in the Netherlands, we were directed to develop a policy report examining an underreported industry that has a large impact on the livelihood of civilians. For this, we opted to analyze the timber industry in Africa. Over the course of several months, our team spoke with experts and conducted open-source research into the timber industry to understand the phenomenon and chart paths ahead for CIVIC’s potential engagement in easing the resulting harm to civilians.

Background: EI-Related Conflict is Nothing New

Conflict associated with extractive resources is nothing new, but its widespread impact has become increasingly apparent. Disputes over extractive industries (EI) have been a dominant theme in the natural resource market, as past conflicts often led to violent security challenges for local communities and the state.

From a local perspective, past extractive projects were often associated with a negative impact on the direct environment, resulting in conflict between local communities and extractive companies.

Timber presents the potential to trigger new conflicts for several reasons. First, like other extractive resources, timber production produces negative externalities that fall onto local communities, such as pollution, displacement, and erosion of cultural sites. Secondly, precedent cases of illegal timber logging show the effects of the industry on communities, causing, or exacerbating, conflict in sub-Saharan Africa. Finally, the demand for timber will only increase with the demand for development. This increased demand for development in the region thus increases the potential for new conflicts to emerge.

Due to these risk factors, timber-logging should be the focus of future extractive industry related conflict-prevention strategies.

Additionally, the timber industry is associated with ever-increasing socio-economic burdens felt by civilians, as many communities rely on the forest as their main resource and livelihood. Logging has been associated with forced displacement, murder, and famine in forest-dependent communities. Moreover, rebel groups exploit the timber industry to finance their operations, while corrupt officials utilize timber as a financial resource to preserve their position of power. These circumstances perpetuate a continuous loop of corruption, violence, and natural devastation.

In order to prevent future conflicts and other negative externalities as a result of the timber industry, it is valuable to determine future potential “hotspots”. In attempt to forecast these potential timber “hotspots” the NCCT  framework was developed. The NCCT framework aims to determine these “hotspots” based on prior conflict timber trends and projected future climate change effects. Four factors which regulate and control the timber market are as follows:

Due to a lack of data and time constraints, our team was not able to exhaustively identify all high-risk countries, though this could be a potential avenue for future research. However, based on the NCCT variables, certain regions have been assessed as posing a high-risk for timber-conflict materializing; Sub-Saharan Africa.

We have developed six recommendations, consisting of policy-oriented and citizen-oriented initiatives.

The policy-oriented recommendations are as follows:

The citizen-oriented recommendations are as follows: