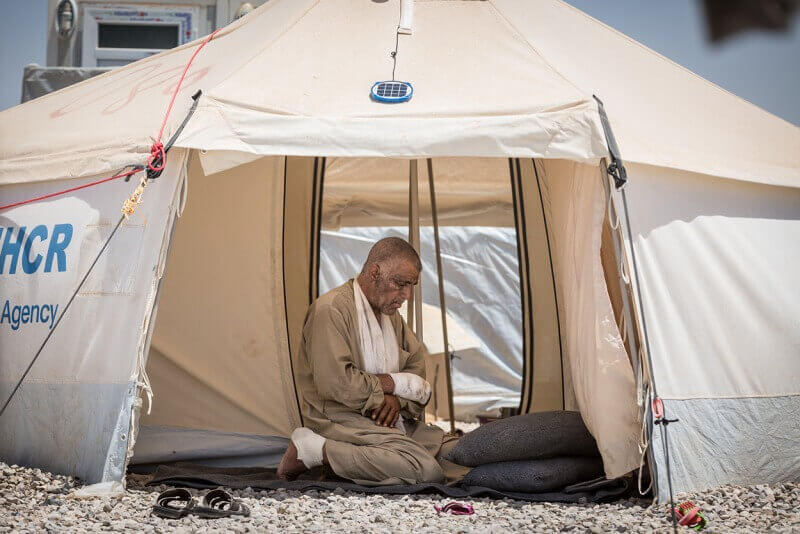 Syria: An estimated 20,000 to 50,000 civilians remain in Raqqa. Conditions in the city are dire, as the availability of food is extremely limited, and there is no access to potable water or electricity. The World Health Organization said that the city’s main hospital and many other health facilities have closed due to airstrikes, and those that are still functioning face critical shortages of medicine, supplies, and equipment. Médecins Sans Frontières reported that many sick and wounded are trapped inside the city with limited chance of escaping. An estimated 200,000 civilians have fled Raqqa since April 1. The UN estimates that 40 percent of civilians remaining in Raqqa will flee in the coming weeks, yet leaving the city remains extremely difficult due to extensive mining, shelling, snipers, and airstrikes; the Islamic State also continues to arrest and torture those caught trying to escape. Aid agencies have reported that children are coming out of Raqqa traumatized – many have lost the ability to speak or have developed speech impediments; some girls remain afraid to leave the house without being fully covered, as required under the Islamic State; others wake up with nightmares. Children also remain vulnerable to recruitment by soldiers; the Islamic State routinely enlisted children to commit violent acts, yet there has also been a ‘significant increase in child recruitment’ by the SDF in its Raqqa offensive.

August 8: USIP – Expanding the Role of Youth in Building Peace, Security; discussion of ideas and resources for strengthening the role of youth who are reducing violence, improving security, and opposing violent extremism in their countries.

The Syrian Observatory for Human Rights reported that 289 civilians, including 68 children, were killed in Coalition airstrikes on Raqqa during the month of July. The Coalition has carried out more than 1,200 airstrikes on the city since the Raqqa offensive began on June 6 and more than 2,500 since January.

Iraq: The humanitarian crisis in Mosul continues, with close to 840,000 civilians still displaced from the city. IDPs from Mosul have been deterred from returning by the lack of basic services and remaining insecurity in the city, notably the presence of homemade bombs and explosives laid “on an industrial scale” by the Islamic State. Mines and improvised explosive devices in houses, schools, mosques, and streets all pose a persistent threat in the city; extensive mining of villages and farmers’ fields also stretches beyond Mosul to the Kurdish autonomous region. The UN Mines Action Service has documented 1,700 people killed by such explosives since clearing operations began last October. Early estimates indicate that clearing explosive hazards in Mosul alone may take over a decade. In addition to the presence of explosives in the city, widespread destruction of homes and infrastructure will likely leave thousands displaced for some time. It is currently estimated that at least 32,000 homes have been completely destroyed in west Mosul, leaving 200,000 people homeless.

Iraqi forces have indicated a plan to launch a major offensive to retake Tal Afar, where between 1,500 and 2,000 Islamic State fighters remain. Army Col. Pat Work said that the Islamic State will likely use, on a much lesser scale, the same tactics there that it used in Mosul – deploying suicide vehicles, littering the city with IEDs, destroying critical infrastructure, and holding civilians as human shields. The city had a pre-conflict population of 200,000, though an estimated 10,000 to 40,000 civilians remain. The Islamic State has prevented people from escaping by shooting those attempting to flee, as it did in Mosul; those who are able to flee, primarily women, children, and the elderly, must take a meandering route to avoid detection by the Islamic State. The UNHCR reported that over 200 families arrived at displacement camps near Mosul last week, most of whom fled fighting in Tal Afar; a further influx of IDPs from the city is expected once the offensive begins. Pentagon spokesman Navy Capt. Jeff Davis said that the U.S.-led Coalition conducted multiple airstrikes in Tal Afar last week.

MOST RECENT OIR CIVCAS REPORT (August 4): In the month of June, CJTF-OIR carried over 180 open reports of possible civilian casualties from previous months and received 72 new reports resulting from Coalition strikes in support of partner force operations to defeat ISIS in Iraq and Syria.

To date, based on Coalition data between August 2014 and June 2017, the total number of reports of possible civilian casualties was 1101. Airwars puts this figure at 4,734.

Senate to Resume NDAA Debate in September: As debate in the Senate over the fate of the Affordable Care Act seems to draw to a temporary close, the National Defense Authorization Act has moved to the forefront of the Senate’s agenda, and progress on the bill is expected once recess ends in the beginning of September. Though the Senate Majority Leader Mitch McConnell (R-KY) sought to address the NDAA at the end of the July session, Senator Rand Paul (R-KY) blocked the attempt until debate occurred on his amendments to end indefinite detention and re-evaluate AUMF. Minority Leader Chuck Schumer (D-NY), who had previously led the charge against debating NDAA until the healthcare debate was concluded, gave his permission for NDAA to advance. According to Schumer, SASC Chairman John McCain (R-AZ) and Ranking Member Jack Reed (D-RI) “arrived at a bipartisan agreement on a list of amendments that can be agreed to, and we can finish this bill.”

State Department Notifies Congress of Tucano Jet Sale to Nigeria: At President Trump’s direction, the State Department notified Congress last Wednesday of its intention to proceed with the sale of twelve Embraer A-29 Super Tucano aircraft to Nigeria, triggering a 30-day period for Congressional review. The sale was initiated under the Obama administration, but was blocked following a Nigerian air strike on a refugee camp in Rann that killed over 230 civilians fleeing Boko Haram. While these aircraft host sophisticated targeting technology that may aid in the precision of strikes, it is unclear that procedures for vetting targets are improving, and John Campbell—a Nigeria specialist at the CFR—suggests to the Washington Post that Nigeria still has “a long way to go.” The Senate houses at least two staunch opponents of arms sales to Nigeria in Senators Rand Paul (R-KY) and Cory Booker (D-NJ), who worked to block jet sales to Nigeria in June citing human rights concerns, and opponents of the State Department decision will likely look to these Senators for direction.

Afghanistan: On July 31, a U.S. drone strike killed seven IS-K fighters in Kunar province. A U.S. spokesman reported to the Bureau of Investigative Journalism that U.S. forces conducted 358 strikes in Afghanistan during the month of July. Most of the strikes were carried out under strategic effects targeting authorities, which since June 2016 has given the U.S. military greater authority to target the Taliban with air strikes and to accompany Afghan troops in the field.

Somalia: A U.S. airstrike killed a senior al-Shabaab leader, Ali Mohamed Hussein, near Tortoroow in southern Somalia on July 30. Somalia’s information ministry said he was part of an al-Shabaab network responsible for planning and executing several bombings and assassinations in Mogadishu.

Yemen: A possible U.S. drone strike killed at least five AQAP fighters in Marib province on July 31, though U.S. Central Command denied any strikes were conducted in Marib during the relevant time.

The Trump administration has launched a review of the 2015 export law that controls what unmanned aerial vehicles can be sold to allies in an effort to make it easier to export U.S.-manufactured systems. UAV manufacturers in the U.S. have for years argued that they are handicapped by the current restrictions, while other drone exporters are not.

Nigeria: The State Department approved the possible $593 million sale to Nigeria of twelve A-29 Super Tucano aircraft and weapons, despite concerns about human rights abuses by Nigerian forces. Implementation of the proposed sale will require special training on the law of armed conflict and human rights, as well as air-to-ground integration to minimize civilian harm in air operations.

Turkey: The Pentagon has raised concerns over a $2.5 billion deal for Russia to supply Turkey with four S-400 missile interceptor batteries, citing a concern over the interoperability of the equipment, as a majority of NATO forces are not trained on operating Russian-made heavy weapons, including the S-400.

Ukraine: The Pentagon and State Department have proposed a plan to the White House to supply Ukraine with anti-tank missiles, antiaircraft weapons, and other arms.

Yemen: Human rights organizations issued a joint letter to Secretary of Defense James Mattis, CIA Director Mike Pompeo, and Acting FBI Director Andrew McCabe, calling for the leaders to make public to the fullest extent possible their agencies’ reviews into allegations that U.S.-allied forces of the UAE and UAE-backed Yemeni forces have committed serious abuses in Yemen, including arbitrary detentions, torture, enforced disappearances, and unlawful prisoner transfers. The letter also calls for public disclosure of any actions that the U.S. has taken with respect to any UAE or Yemeni forces implicated in serious abuses.

The Trump Administration has further expanded President Obama’s use of lethal counterterrorism operations outside of active conflict zones. Under President Trump, there have been five times as many operations than under President Obama for a comparable number of days. JSOC, rather than the CIA, has been the lead executive authority for the expanded operations. President Trump will likely continue to use JSOC to achieve counterterrorism objectives, yet the overreliance on lethal force is exhausting American special forces and is insufficient to confront the root causes of terrorism.