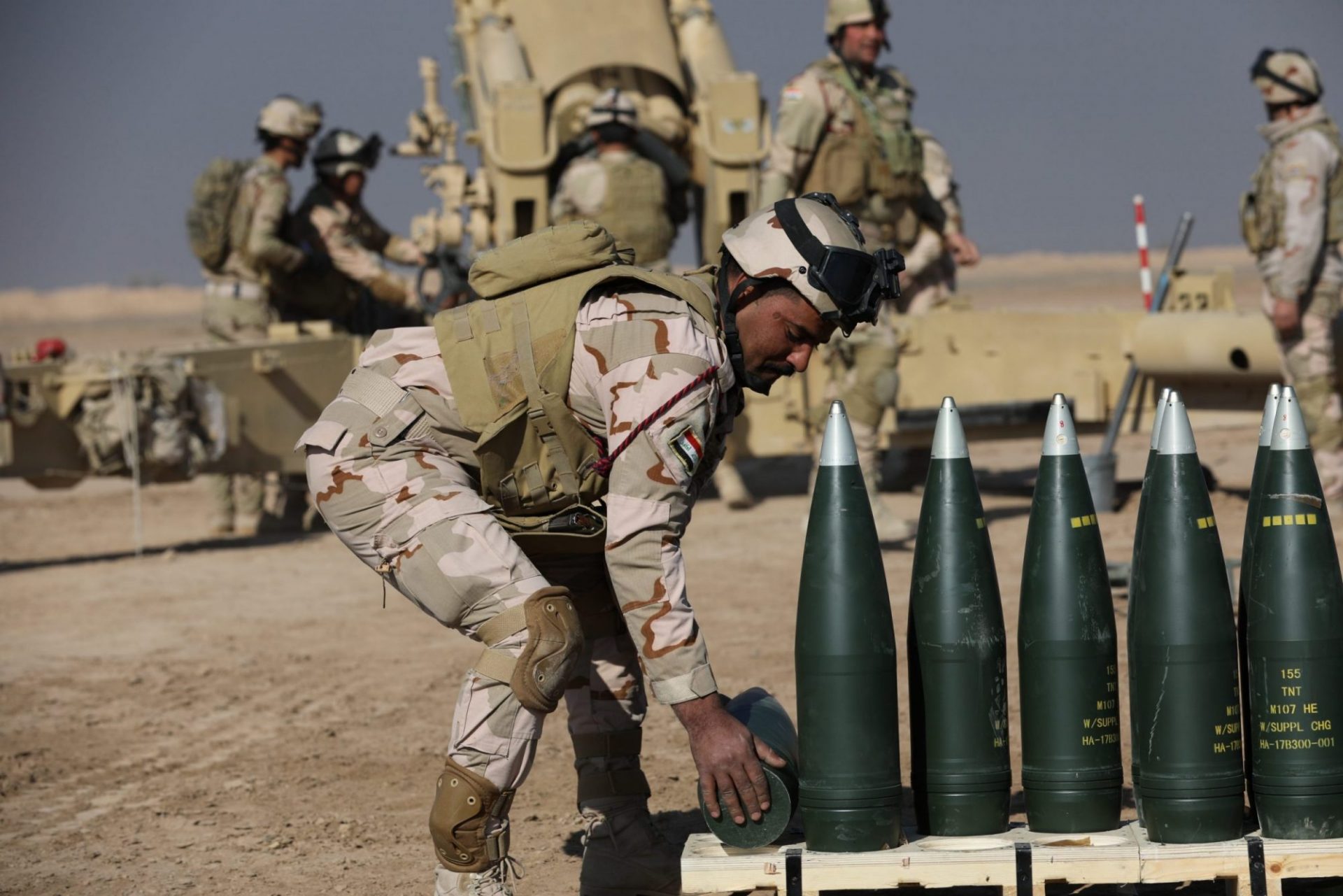 The Coalition announced on Monday that it will shift its focus in Iraq from enabling combat operations to sustaining military gains against the Islamic State. It will “retain an appropriate amount of capabilities, as well as an advisory presence to continue training, advising, and equipping our partners” and will “focus more on policing, border control, and military capacity building.” Coalition spokesman Col. Ryan Dillon said the Coalition’s continued presence will be “conditions-based, proportional to the need, and in coordination with the government of Iraq.” An Iraqi government spokesman and Western contractors told the Associated Press that the US is withdrawing troops from Iraq and that American soldiers, weapons, and equipment are now being sent to Afghanistan. Despite the drawdown, Coalition strikes continue in Iraq and Syria with forty-one strikes between February 2 and 8.

Around 60,000 Syrians have returned to Raqqa since the fall of the Islamic State in October, but the number of exploded ordnance in the city “is something that we have never seen before,” according to Panos Moumtzis, the UN assistant secretary general. Unexploded landmines and improvised explosives are causing between fifty and seventy casualties a week, and civilians are being advised against returning to their homes.

It gets to the point where you don't want to ask anyone to film for you because it is so incredibly dangerous to leave the house. And what haven't we already be shown? That they risked their lives to document? And what difference did it make? #Ghouta #Syria #wecantsaywedidntknow pic.twitter.com/4a3ZH0khiG

February 12: USIP – US-Pakistan Relations at a Turning Point: What’s Next?

President Trump Signs Defense Budget: After Congress reached a bipartisan deal to raise both defense and non-defense budget caps, President Trump has signed a 2-year funding deal for Pentagon, a spending increase of over $200 billion across both years. Proponents of the legislation argue that an overhaul is needed to replace aging military technology and overcome the effects of years of budget cuts, and complaints about the ad-hoc basis for military funding through continuing resolutions will likely be assuaged by the multi-year structure of the plan. When asked where the new funds would be used, Defense Secretary Mattis outlined a program including “space and cyber, nuclear deterrent forces, missile defense, advanced autonomous systems, artificial intelligence, and professional military education.” The budget also proposes major increases in the number of ships, planes, and marines ready for combat. The newly-authorized defense hike has inflated the Pentagon’s budget to an all-time high, and those interested in the conduct of U.S. forces abroad should pay close attention to how this new capacity influences decision-makers.

Senators Seek AUMF Memo from White House: As the Defense Department’s budget rises to historic levels, some members of Congress are reiterating now-familiar complaints that the legislative branch is not doing enough to provide oversight over military affairs. Senator Tim Kaine (D-VA) has requested access to a memo distributed in the White House detailing the legal justification for ongoing military operations in Syria. The administration claims that these activities are legal under the 2001 Authorization for the Use of Military Force, which allows military operations against individuals complicit in the 9/11 attacks. “The fact that there is a lengthy memo with a more detailed legal justification that has not been shared with Congress, or the American public, is unacceptable,” wrote the Senator in a letter to Secretary of State Tillerson. Senator Kaine has been an outspoken proponent of AUMF reform, and has proposed a bill that would update the 2001 AUMF alongside Senator Jeff Flake (R-AZ), viewable here.

Afghanistan: Suspected US strikes in the border region between Afghanistan and Pakistan killed a senior Pakistani Taliban deputy and several other militants. One strike reportedly killed the head of the Mashud faction of Pakistani Taliban, Khan Saeed, and three other fighters in Paktia province’s Birmal district, and a second strike targeted a compound in North Waziristan in Pakistan, killing seven militants. Taliban sources also confirmed that a US strike killed Saeed.

Yemen: In a statement on Tuesday, Central Command said that the US conducted eight airstrikes in Yemen in December 2017 and ten strikes in January 2018, targeting both AQAP and the Islamic State’s branch in Yemen.

Afghanistan: In a press briefing from Kabul on Wednesday, Major General James Hecker said that Central Command has designated Afghanistan as its main effort and that the US is shifting intelligence-gathering, combat aircraft, and troops to Afghanistan as the anti-ISIS campaign in Iraq and Syria winds down. An A-10 squadron has deployed to Kandahar airfield; there are 50 percent more MQ-9 Reapers in the country; an additional combat search and rescue squadron has been added; and the intelligence community will now be able to focus more on Afghanistan to develop targets and provide data analysis. Hecker said that Resolute Support is focused on helping the Afghan government control 80 percent of the population and that increasing Afghan air capability will be one of the most significant ways to achieve this. Afghan air strikes now almost double those of the US, though human rights groups warn that more strikes by Afghan forces could result in greater civilian casualties.

Hecker also noted that since the US air campaign began in November, US and Afghan forces have denied the Taliban over $30 million in direct revenue and over $160 million from drug traffic organizations. However, he acknowledged that the air campaign is just one facet of the overall campaign, saying “you’re not just going to bomb them into submission.”

US forces launched a series of strikes in Afghanistan’s Badakhshan province this week, targeting the Taliban and the East Turkistan Islamic Movement (ETIM), a separatist group originating from China’s Xinjiang region. Major General Hecker said that the strikes were conducted under existing authorities – those provided in August under Trump’s South Asia strategy, as ETIM fighters were not specifically targeted in the strikes, but training facilities used by both the Taliban and ETIM. At the Washington Post, Dan Lamothe explains how the expansion of the US bombing campaign to target ETIM shows how the war in Afghanistan has changed under Trump.

Testifying before the Senate Foreign Relations Committee on Tuesday, the Defense Department’s top Asia official, Randall Shriver, said that the war in Afghanistan will cost $45 billion this year, including $13 billion for US forces in the country, $13 billion for Afghan forces, $780 million for economic aid, and the remainder for logistical support.

Arms Exports: The Trump administration is moving forward with a plan that would make it easier to sell arms abroad through a process that critics argue eliminates regulatory and congressional oversight. The proposal would shift oversight of some US arms sales from the State Department to Commerce Department for a faster approval process. Administration officials have said the changes do not apply to uniquely military weapons, but items that are already commercially available. Arms experts argue that making it easier to purchase US arms increases the likelihood that those weapons will be misused or fall into the wrong hands.

War on the Rocks: Last fall, Defense Secretary Mattis signaled the military’s intention to shift its counterterrorism strategy to focus more on Africa. Nathaniel Powell argues that expanded US counterterrorism operations in the Sahel “would be counterproductive and deeply destabilizing, because it is largely premised on a flawed understanding of the political dynamics of conflict in the region.”