Syria: An estimated 50,000 civilians remain in the city of Raqqa, paralyzed by fear of Coalition airstrikes and shelling on the ground, but prevented from escaping by Islamic State fighters. Civilians attempting to flee have used local smugglers, though the price of passage raises each day, and those caught fleeing have been arrested and tortured by the Islamic State. CJTF-OIR commander, Lt. Gen. Stephen Townsend, dismissed the charge that the U.S.-led Coalition is taking insufficient precaution in its bombardment of Raqqa, insisting that it is being as careful as it must and can be, despite UN investigators’ warnings last month that Coalition airstrikes have caused a “staggering loss of civilian life.” The Syrian Network for Human Rights reports that Coalition forces killed 265 civilians in the month of June and 1,008 civilians, including 291 children, since the start of the year. The Coalition’s rate of civilian casualties is surpassed only by Syrian regime forces.

SEE:CIVIC: Recommendations to the Anti-ISIS Coalition on Operations in Syria

Iraq: Iraqi commanders predict final victory in Mosul this week, though resistance from the Islamic State has been fierce, and “extreme levels of conflict” are taking a devastating toll on the estimated 10,000 civilians remaining in the city. The UN said between 2,000 and 3,500 civilians are fleeing Islamic State territory daily. Humanitarian groups have reported a spike in the number of people suffering from malnutrition and dehydration, and Médecins Sans Frontières has documented a sharp increase in the number of trauma cases among civilians. MSF also warns that only a small number of civilians have access to medical care and that many are dying on the battlefield. Save the Children said` that brutal fighting and years of living under Islamic State rule have caused dangerous levels of psychological damage in Mosul’s children.

Coalition commander says "show me some evidence" that many civilians are dying from airstrikes in Raqqa. https://t.co/ZlexgTjPJ9

Human Rights Watch reported allegations of Iraqi forces beating and unlawfully executing men and boys fleeing Mosul who are thought to be affiliated with the Islamic State. HRW urged Iraqi authorities to investigate all alleged crimes, though said it does not know of a single transparent investigation into abuses by Iraqi forces, any instances of commanders being held accountable for abuse, or any victims of abuse receiving compensation. The UN Human Rights Office also raised concerns about threats of forced evictions against individuals believed to be associated with the Islamic State. Hundreds of families have received “night letters” warning them to leave by a particular date or face forced expulsion. The OHCHR said illegal forced evictions and forcible displacement may amount to collective punishment and are in clear violation of the Iraqi Constitution, international human rights law, and international humanitarian law.

Airwars reports that the impending victory in Mosul has come at a “terrible cost,” as the scale of death and destruction in the city becomes clearer. Since the start of the campaign in October 2016, Airwars estimates between 900 and 1,200 civilians have been killed in Coalition air and artillery strikes, and nearly 900,000 have been displaced. The extensive use of airstrikes and indiscriminate ground-fired munitions by Coalition and Iraqi forces have caused a catastrophic level of physical damage, destroying over eighty percent of West Mosul. The Iraqi government estimates it will cost $100 billion to rebuild areas damaged in the fight against the Islamic State, while the UN estimates that repairing Mosul’s basic infrastructure will cost over $1 billion and will take over a year to complete in the west.

SEE: The Fall of the Caliphate in Mosul, an Iraqi Perspective

Next week, senior leaders of the Global Coalition to Defeat ISIS will convene in Washington D.C. for a series of meetings. On July 12, the full 72-member Coalition will meet for in-depth discussions on how to accelerate Coalition efforts to defeat ISIS in the remaining areas it holds in Iraq and Syria and maximize pressure globally on its branches, affiliates, and networks.

House Appropriations Committee Forces Vote on New AUMF: Last Thursday, the House Appropriations Committee approved California Representative Barbara Lee’s amendment to the Defense Appropriations Bill that would repeal the 2001 Authorization for the Use of Military Force, or AUMF. The AUMF in question grants the President authorization to use military force against “nations, organizations, or persons he determines planned, authorized, committed, or aided the terrorist attacks that occurred on September 11, 2001, or harbored such organizations or persons.” However, the application of this AUMF has been expanded far beyond its original scope, and it has been used to justify U.S. fighting against ISIL and Syria—wars which Senator Rand Paul (R-KY) and others now describe as illegal and have incurred massive civilian casualties. The amendment does not, however, repeal the 2002 AUMF against Iraq, which some legal experts suspect could still be used to justify a war against ISIL in Syria. The bill is now moving to the House floor and will require significant support from allies in the House, Senate, and outside advocates if it hopes to survive political opposition and procedural challenges.

Congressional Delegation Speaks in Kabul: A delegation of Senators spoke in Kabul on Tuesday, with Senator John McCain (R-AZ) again leading the charge against the Trump administration’s lack of policy in Afghanistan. McCain expressed frustration at the White House’s willingness to send thousands more troops to Afghanistan with no articulated strategy beyond “don’t lose,” and proposed an objective of his own: “getting major areas of the country under control and working towards some kind of ceasefire with the Taliban.” President Trump’s lack of strategic transparency or focus does little to reassure members of the human rights community, who have already expressed fears that he aims to dismantle or ignore President Obama’s PPG on drone strikes, especially requirements of “near certainty” of no civilian casualties.

Senators Lindsey Graham (R-SC) and Sheldon Whitehouse (D-RI) further critiqued the administration for “hollowing out” the State Department, leaving it “woefully understaffed” with diplomatic vacancies while turning towards an increasingly militaristic foreign policy. Senior military staff have expressed similar views in recent months. In early May, Special Operations commander Gen. Raymond Thomas told Senator Elizabeth Warren (D-MA), also a member of the delegation, that a weak diplomatic arm of U.S. foreign policy “would make our job harder.” Calls to protect the State Department have grown since President Trump proposed a budget cut of over 30% for the agency.

NDAA Updates: The House Appropriations Committee approved a Defense Appropriations Bill last Thursday that provides $658 billion in defense funds, falling short of the $696 billion requested in the House NDAA. This bill’s base funding—$584 billion—still exceeds the sequestration budget cap by $35 billion, as HASC ranking member Adam Smith (D-WA) notes: “We have not adopted a budget resolution, we do not have a clear plan to lift or modify the caps imposed by the Budget Control Act, and it is unclear whether the amounts authorized in this bill will ultimately correspond with reality.”

New information has emerged about the Senate Armed Services Committee’s version of the NDAA, which has thus far remained almost entirely behind closed doors. Notably, Senator Elizabeth Warren (D-MA) has passed several amendments that serve to protect civilians in conflict. These include a measure to prioritize the treatment of civilian victims of terror in military hospitals and an amendment requiring the Department of Defense to submit to Congress an annual report on civilian casualties resulting from U.S. military actions. The latter provision closely mirrors an amendment passed in the House NDAA by Rep. Beto O’Rourke (D-TX) and was also submitted to the Senate as the Preventing Civilian Casualties in Military Operations Act on June 28th.

Somalia: U.S. forces conducted an airstrike against al-Shabaab in the Lower Shabelle region on July 2. A second U.S. airstrike was conducted on July 4 about 300 miles southwest of Mogadishu. In late March, President Trump declared parts of Somalia to be an area of active hostilities, thus exempting it from the more stringent targeting limits of the Presidential Policy Guidance. However, the head of Africa Command, Gen. Thomas D. Waldhauser, said that he would keep the near certainty standard of no civilian deaths.

The U.S. Circuit Court of Appeals for the DC Circuit dismissed a suit filed by the family members of two Yemeni men reportedly killed in a U.S. drone strike in 2012, which the plaintiffs allege violated domestic and international law. The court held that the case was a nonjusticiable political question, though Judge Janice Rogers Brown’s concurrence strongly criticizes oversight of the U.S. drone program and argues that U.S. democracy is “broken.” Brown said there is pitifully little oversight within the Executive and that Congressional oversight is a “joke.” She called for the Executive and Congress to establish a clear policy on drone strikes and precise avenues for accountability.

At Lawfare, Kenneth Anderson and Matthew Waxman’s recent essay considers the debate over the law, regulation, and ethics of autonomous weapons systems. The authors explore whether or not AWS are able to satisfy the requirements of international humanitarian law and address disputes over the morality of automated targeting. One side of the debate argues that AWS should be legally regulated under the existing principles and requirements of international humanitarian law, while the other side advocates for a preemptive international treaty ban on all such weapons. 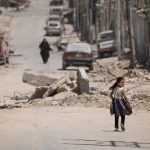