On Tuesday, May 22, Center for Civilians in Conflict joined the Stimson Center, Security Assistance Monitor, and Forum on Arms Trade to host “Taking Aim: A Closer Look at the Global Arms Trade.” The event brought together a large group of government officials, investigative reporters, human rights leaders, researchers, a former arms dealer, and members of the public interested in the effects of the global arms trade on human and national security.

US Senator Chris Murphy (D-Connecticut) shared developments from Capitol Hill and encouraged attendees to call for more Congressional attention to the global arms trade. “Members [of Congress] are ‘waking up’ to the need for more awareness of impact of global arms trade,” Murphy said. “The level of oversight [of arms sales] is simply insufficient, we can do better, and you can help us.”

The day’s three panels dove into current policies and the need to better assess risk to civilians. Moderated by Rahma A. Hussein of the Counterterrorism, Armed Conflict, and Human Rights project at Columbia Law School, the first panel addressed “Living with the Arms Trade: Perspectives from Conflict Areas.” In the second panel, “Assessing Risk in US Arms Transfers,” moderated by Colby Goodman, Director of the Security Assistance Monitor, CIVIC’s Senior Director of Programs, Shannon N. Green, shared insights from CIVIC’s recent report on arms trade, With Great Power, and outlined the responsibility of states to regulate arms transfers with regard to civilian casualties. “States exporting arms have the responsibility and the power to ensure that they do not supply arms that will be used to commit atrocities or facilitate violations of international humanitarian law and human rights,” Green said.

The day concluded with a conversation between Rachel Stohl, Managing Director of the Stimson Center, Guy Lawson, journalist and author of War Dogs, and David Packouz, former arms dealer and featured character in Lawson’s book.

A special thank you to our partners at Stimson Center for providing video content of the event:

The first panel: “Living with the Arms Trade: Perspective from Conflict Areas” (Begins at 10:00 and restarts at 1:34:00) featured:

The second panel: “Assessing Risk in US Arms Transfers” (Begins at 2:25:55) featured: 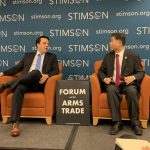