April 27, 2009By Center for Civilians in Conflict

Paul McMaster works as a Médecins Sans Frontières surgeon in Vavuniya hospital. This is an excerpt from his diary:

Wednesday 4.45am Woke up and started operating. A 15-year-old boy with severe blast injuries to his abdomen. He was on his own and in shock. Surgery took about two and a half hours and he was reasonably stable. The last I heard, at least, he was stable. But our concern is what happens to him now. This is a hospital with 450 beds, three intensive care beds, and we now have 1,700 patients with up to 50 coming in a day. There are patients on the floor, in the corridors, even outside. This boy is going to be on the floor. Infection is the main worry. The wounded take days to get to us by bus and infection has often set in by the time they get here. Many of them are dying on the buses that bring them, and the bodies are taken off along with the living.

7.45am I did the rounds of the emergency department. We have cases of people with their feet blown off waiting 13 hours to go into theatre. Three-quarters of the patients we see have blast injuries.

10am We had some discussions on how to increase the flow. There are teams working around the clock. We have three surgeons: myself, a Sri Lankan surgeon and another MSF surgeon from Tampa Florida. We have put two operating tables in one theatre. Things are fairly tight and congested but we get by. There are an extremely hardworking team of Sri Lankan anaesthetists and the Sri Lankan nurses here have been working 20 hours a day.

1.45pm Went back to surgery. A head injury to a child – a boy about nine. It took about two and a half hours and went OK. The problem is the internal damage to the brain. Only the next few days will tell how bad that has been.

4pm Began work on a lower leg amputation. A man had stood on a landmine. He had been with his wife and his daughter. We will operate on the wife tonight. The child has already had some surgery to remove pieces from her arm. Technically, the surgery on the man went well, but the problem is the landmine blasted soil into his leg. There is always the fear that infection will set in.

6pm I did a series of small cases – gunshot wounds. Over the course of the day I operated on 16 patients, five of them amputations on children. These are deeply traumatised people. The children in the emergency wards see people brought in with major blast limb injuries and are just sitting silently, emotionless, in the middle of all this, so we try to treat them and move them quickly out to the surgery or the ward.

9pm Finish surgery for the day. Going to find something to eat and then get some sleep.

Friday 2.30pm I have been in the whole time and do not have the big picture, but in the last 24 hours we have seen, for the first time, fewer patients coming in. Only 44 severely wounded patients came in to the hospital yesterday, although more have come in this morning. It might be that some of the other casualties are going elsewhere, to other hospitals. We’ve sent a team on a exploratory mission to try and find out exactly what’s happening.

One of the patients I have seen is a little girl of about seven or eight who has a severe leg injury. Her elder sister is in the same bed with wounds on her arms and legs. A third sister has burns to her face. Their mother has been killed and their father is in intensive care. With the level of aftercare that we can provide at the moment he has a 50/50 chance of making it, at best.

We have done 71 major operations over the past 24 hours. A lot of the these operations have been catching up on the last few days. It has been bedlam in the hospital. But it hasn’t got worse in the last 24 hours. We are only seeing the acute casualties. There are many people who are ill, several of the injured people also have chickenpox. We are hearing reports that there have been outbreaks of chickenpox in the camps because peoples’ immune systems are so weak.

I hear that some extra nurses are being sent to the hospital. The Sri Lankan medical authorities have made a real effort to send extra staff to help out. There are simply too many people to treat them all. We are not able to save some people because we need to provide more aftercare. There are simply not enough nurses.

• Paul McMaster is a retired surgeon from Droitwich, now based in Amsterdam.

SRI LANKA:  ‘This is too much to take. Why is the world not helping?’ 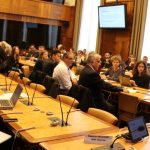 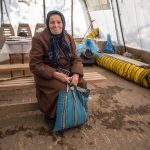