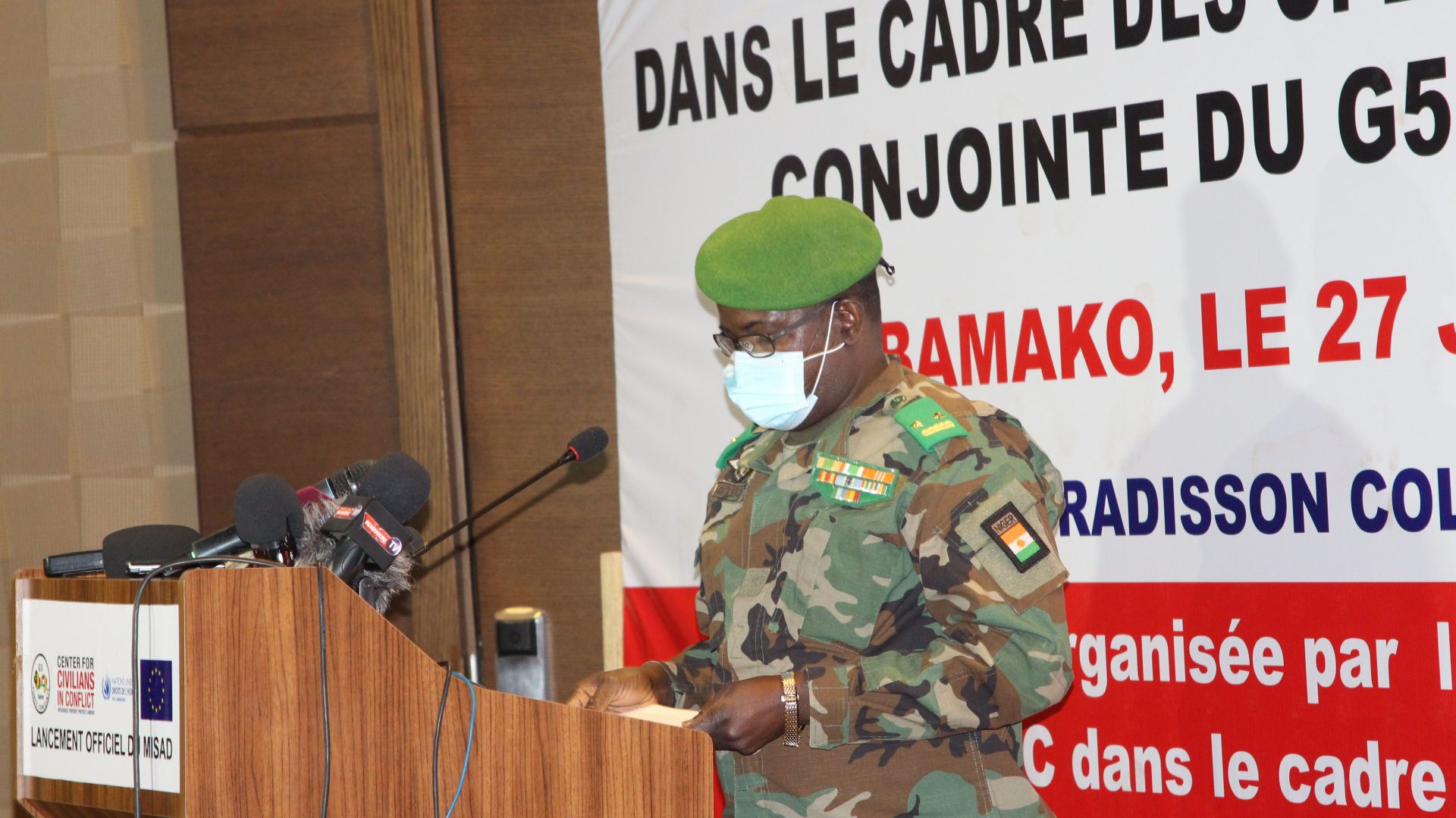 On June 27, 2020, General Oumarou Namata, commander of the G5 Sahel Joint Force, approved the establishment of the Civilian Casualties Identification, Tracking and Analysis Cell (CITAC or MISAD in French) within the force. The Joint Force launched the MISAD as part of its implementation of the Human Rights Compliance Framework (HRCF), which is being led in partnership with the Office of the United Nations High Commissioner for Human Rights (OHCHR) and CIVIC, and is funded by the European Union (EU).

The HRCF framework recommends, in the sixth pillar, a mechanism for monitoring and reporting conduct during operations, especially the incidents that affect civilians. In the process of establishing the framework, General Namata formed a working group with the Joint Force and CIVIC. The group of nine experts, led by the Joint Force, made recommendations on the formation of the CITAC/MISAD. General Namata approved the CITAC/MISAD mechanism on the basis of the recommendations and analysis of the working group.

On 27 January 2021, a ceremony for the official launch of the CITAC/MISAD for Joint Force operations was held in Bamako, Mali. The event was organized by the Joint Force, under the leadership of General Namata, in collaboration with CIVIC and in partnership with OHCHR (financed by the EU).

The event was attended by a number of senior officials, including the Defense Minister of Mali, the G5 Sahel Executive Secretary, the EU Special Envoy for the Sahel, the EU Ambassador in Mali, the head of the West/Central Africa office for OHCHR, and General Namata, along with other senior representatives from Niger, Chad, Mauritania, Burkina Faso, CIVIC, OHCHR, MINUSMA, and the EU.

General Namata highlighted how the CITAC/MISAD will help the Joint Force to put the protection of civilians further in the heart of its operations by: “First, a better analysis and understanding of the impact of its operations on civilians by identifying each harm or incident and analyzing trends by area over a regular period. Secondly, systematic efforts to prevent damage by regularly improving tactics, procedures and guidelines for future operations. The mechanism generates a deep understanding of the causes of damage that allows for improved tactics in planning operations and feedback. Thirdly, strengthening links with civilian populations. This mechanism will allow us to have dialogue with civilian populations, in settings where this is possible and does not expose them, on efforts to prevent damages, and on the incidents they have reported.”

CIVIC’s Regional Director for the Sahel, Vianney Bisimwa, stressed the importance of the occasion for civilians. “Civilians in the Sahel hope to protect their homes; to cultivate their fields; to visit their sisters, brothers, and friends freely; to milk their cattle; to go to bed with the hope that their children will go to school, that the market will be open tomorrow, and that their local football team will win the regional championship. They realize that returning to life as normal may be only a hope, and one that carries with it inevitable dangers. But they hope, and ask that in all cases, that their dignity is preserved and maintained,” said Vianney. “No civilian should be harmed during a conflict, but the fact is, many are. When conflict takes places in such a complex context as the Sahel, where trafficking of all kinds, divisions, fear, local conflicts, and governance issues are intertwined, the risk of harm to civilians is very high. More than anyone else, the defense and security forces should do everything in their power to ensure that they mitigate harm to civilians and protect them from violence caused by others. The MISAD, which General Namata launches today, demonstrates the Joint Force’s commitment to that aim.”

The Defense Minister of Mali echoed this commitment, saying “We are all aware of the heavy price our civilian populations are paying. We will increase our efforts to protect them from damage resulting from our operations or those of third parties.” He also congratulated CIVIC for its constructive and sensitive approach to partnership and collaboration with the defense and security forces in the region.

As only the second such civilian harm tracking and response capability for security forces in Africa and one of only a few in the world, the Joint Force has a great opportunity to lead by example and enhance civilian harm mitigation practices.