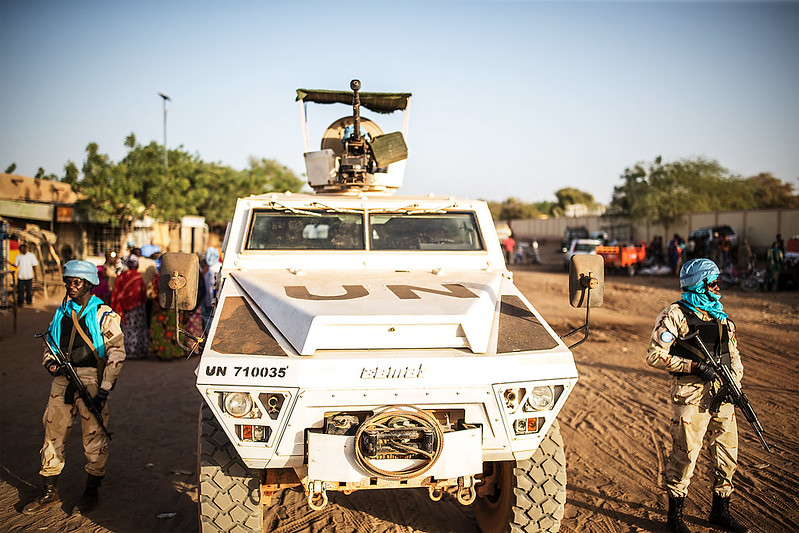 On 29 June, after weeks of remote negotiations, the United Nations Security Council (UNSC) agreed upon MINUSMA’s mandate for the next 12 months. Last year the Security Council made a significant change to the mandate, by adding a second strategic priority that instructed the Mission to help the Malian authorities protect civilians and reduce intercommunal violence in central Mali.  Recognizing that MINUSMA is still adapting to implement the new strategic priority, the Security Council made more modest amendments to the protection language in the new mandate.  However, there are a few substantive changes that seek to improve the Mission’s protection of civilians that will be discussed in this two-part blog.

Part 1 will focus on the new request for MINUSMA to record its rate of response to warnings about imminent threats to civilians. Part 2 will examine some of the changes to the elements for the Secretary-General to report on in his quarterly updates to the Security Council regarding the situation in Mali and the progress made by MINUSMA.


The potential benefits of recording the rate of response

Much of the language in the dedicated ‘Protection of Civilians’ section of the mandate remains unchanged from last year, but Paragraph 28(c)(ii) contains perhaps the most notable change. It instructs MINUSMA “to strengthen early warning mechanisms and systematically record and analyse MINUSMA’s rate of response” to imminent threats to civilians. Previous mandates have requested that missions strengthen early warning mechanisms, but the second part is unprecedented language in UN peacekeeping mandates. Requiring MINUSMA to systematically record and analyze its response rate will encourage the Mission to adopt a more data-led approach when evaluating its effectiveness at protecting civilians. The potential benefits of systematically recording this data are manifold.

First, this new language provides an important signal of support for MINUSMA’s ongoing efforts to improve early warning and response. MINUSMA has already taken numerous steps to better coordinate how it processes and shares early warnings. Indeed, on 15 June, the Mission approved and is now starting to roll out a new set of Standard Operating Procedures (SOPs) that address how MINUSMA processes early warnings and rapidly responds to threats to civilians. The SOPs include guidance to improve tracking responses. Language in UNSC mandates indicates to Mission leaders what they should prioritize. Initiatives that receive sustained backing from senior Mission officials are more likely to be fully implemented rather than de-prioritized amid the many other pressing demands.

Second, including the new requirement in the mandate, which instructs the Mission to undertake its protection activities in a comprehensive and integrated manner, should help MINUSMA accurately capture its rate of response.  MINUSMA’s force began tentatively recording its response rate during Operation Oryx in Mopti region, which was launched following the massacre of civilians in Ogossagou in April 2019. However, CIVIC’s research has found that MINUSMA has not yet begun recording the number of confirmed early warnings it receives or systematically gathering information from across Mission components regarding the response provided.

The response of the military component is not, and should not be, the whole story. MINUSMA can respond to warnings of threats to civilians by exerting political pressure on armed actors. Deploying the Mission’s police component may also be a more appropriate response in certain circumstances. The Security Council’s request, coupled with the new SOPs, should ensure that the response rate captures the contributions of all the civilian and uniformed components that receive, triangulate, analyze, and respond to early warnings.

Third, if response rates are recorded, the data gathered should enable MINUSMA to demonstrate where it is making progress in terms of protecting civilians. For example, MINUSMA’s peacekeepers have been much more present beyond their bases under the present Force Commander, with troops establishing temporary operating bases in remote areas for up to three weeks at a time. Anecdotally, this more proactive approach has improved MINUSMA’s capacity to intervene quickly to prevent imminent attacks because they are closer to the hotspots. But there is very little data to assess whether the greater use of temporary operating bases has had a positive impact on the Mission’s rate of response.

Fourth, collecting such data should help demonstrate the value of having military helicopters in every operational sector. Whereas MINUSMA has light attack helicopters permanently based in Gao and Timbuktu regions, this is not the case for the Mission’s presence in Mopti, which has to borrow military helicopters from the northern regions. MINUSMA officials have told CIVIC that the light attack helicopters are one of the most effective means the Mission has to respond to early warnings because they can travel much faster than a ground unit. There is no doubt that the lack of military helicopters permanently based in Mopti limits the Mission’s capacity to intervene, but there is no data to assess how severe an impact this capability gap has.

Recording the rate of response in each operational sector should better enable the Mission to highlight how important it is to be able to respond by air to imminent attacks on civilians. This information could be extremely helpful for the UN when seeking to persuade Member States to pledge military helicopters to MINUSMA and other missions. It could also highlight other crucial capability gaps.

Fifth, recording the rate of response should make it easier to identify other causes of ineffective or delayed interventions to protect civilians. If the rate of response is significantly lower in one operational sector than in all others, Mission leaders will be able to clearly see there is a problem that needs addressing. The development of the new SOPs should help explain what that problem is. Under the new procedures, MINUSMA staff will log the actions they have taken following the receipt of an initial early warning. This should ensure the Mission has a reliable and complete record of how it processed and responded to an early warning, enabling staff to generate more thorough and constructive lessons learned during after action reviews.

For example, one operational challenge could be cooperating with the Malian authorities, especially the Malian Armed Forces (FAMa). MINUSMA’s mandate makes clear that the Malian authorities are primarily responsible for protecting civilians and reducing intercommunal violence in central Mali, thus it is vital the focus isn’t solely on peacekeepers’ ability to intervene. Whenever MINUSMA receives an early warning relating to an area where the Malian government is best placed to intervene (e.g. through mediation, the Malian police, or the FAMa), MINUSMA may choose to alert the Malian authorities to respond. However, it is often difficult for UN peacekeepers to coordinate with their Malian counterparts, particularly since the FAMa are not always keen to inform MINUSMA where their troops are located.

While cooperation may not always be easy, the long-term responsibility for protecting civilians in Mali naturally rests with the Malian authorities. Therefore, as MINUSMA records data on its response rate, it would be beneficial if the Mission notes how frequently it has alerted the Malian authorities to imminent threats and whether they have been able to successfully intervene.

Data as a learning tool

Senior officials within peacekeeping missions are often overwhelmed with data. But many of the data points generated relate to the number of activities conducted rather than the efficacy of those interventions. For any mission to accurately understand how well it is protecting civilians, systematically recording the response rate to confirmed early warnings is an essential starting point. The response rate should not be used as a tool to merely highlight failures, but to better understand what is needed to protect civilians from appalling violence.