Where is the United States at war and what laws does the US government call upon as justification?

As of today, the US conducts counterterrorism operations involving lethal force in at least six countries. The US government’s broad interpretation of domestic and international law that supports these operations could provide the basis for using force in other locations in the future.

When the US uses force in a situation of recognized armed conflict, it must have a lawful basis for entering into the conflict under international and domestic law. Once involved in conflict, the US must also adhere to international humanitarian law, also referred to as the “laws of armed conflict.”

The US government’s broad interpretation of policy and law related to where and when it can use lethal force has fueled two important debates. The first centers on whether US policy allowing for the use of lethal force outside of recognized conflict areas has a legitimate basis in international law. These concerns are noted in our March 2018 joint statement and the Report of the Stimson Task Force on US Drone Policy. The second centers on whether current and future US military operations are adequately authorized by existing domestic legislation (namely, the 2001 Authorization for the Use of Military Force (AUMF)) and subject to appropriate Congressional oversight.

To help you, our readers, understand the US government’s stated basis for the use of force around the globe, we’ve developed quick reference guides listing some of the relevant sources of law and policy.

In this first guide, we focus on law and policy in the context of counterterrorism operations.

The US military also conducts operations “by, with, and through” local partners by advising, accompanying, or providing intelligence or logistical support in at least 70 additional countries. In these places, US forces may be indirectly involved, or at risk of becoming directly involved, in the conduct of hostilities. These activities are governed by different laws and policies, which will be addressed in a future post.

Constitutional War Powers. Article I, Section 8, Clause 11 of the US Constitution grants Congress the power to declare war. Article II, Section 2 grants the President the power to direct the military after a declaration of war as the Commander-In-Chief of the armed forces. Legal scholars have generally concluded that while the President cannot declare war, he or she could use force to “repel sudden attacks” against the US and its armed forces. The DOJ Office of Legal Council has also determined that whether a particular planned engagement constitutes “war” for constitutional purposes depends on the “anticipated nature, scope, and duration” of the planned operations. However, Presidents have often engaged in large-scale military operations without Congressional declaration or consent, a source of conflict and debate throughout American history.

War Powers Resolution. The 1973 War Powers Resolution requires the President to submit a report to Congress within 48 hours after US armed forces are introduced into “hostilities or into situations where imminent involvement in hostilities is clearly indicated by the circumstances.” After the submission of such a report, the President is required to terminate the reported use of the armed forces within 60 days thereafter, unless Congress is physically unable to meet, declares war, specifically authorizes the action, or extends the deadline.

Authorization for the Use of Military Force Against Terrorists (2001 AUMF). The 2001 AUMF, passed by Congress shortly after 9/11, authorized the President “to use all necessary and appropriate force against those nations, organizations, or persons he determines planned, authorized, committed, or aided the terrorist attacks that occurred on September 11, 2001, or harbored such organizations or persons.” The AUMF was initially interpreted to cover al-Qaeda (the organization that committed the 9/11 attacks) and the Taliban (who harbored al-Qaeda). The US government has since stretched this initial intent and interpreted the AUMF to authorize the use of force against organizations associated with al-Qaeda and the Taliban, both within and outside of Afghanistan, including al-Shabaab, Daesh (or the Islamic State of Iraq and Syria), and al-Qaeda in the Arabian Peninsula (AQAP). However, the term “associated forces” does not appear in the text of the AUMF. According to the Obama White House, consideration as an “associated force” under the AUMF requires than an entity 1) be an organized, armed group that has entered the fight alongside al-Qaeda or the Taliban; and 2) be a co-belligerent with al-Qaeda or the Taliban in hostilities against the US or its coalition partners.

Authorization for Use of Military Force Against Iraq Resolution of 2002 (2002 AUMF). The 2002 AUMF is a joint resolution passed by Congress authorizing the President “to use the Armed Forces of the United States as he determines to be necessary and appropriate in order to… defend the national security of the United States against the continuing threat posed by Iraq.” The authorization is without geographic or temporal bounds and refers broadly to the “threat posed by Iraq” rather than to the government of Iraq or to Saddam Hussein. As such, the US government continues to interpret the 2002 AUMF as authorization for today’s military actions against Daesh in Iraq as well as some actions in Syria.

Presidential Policy Guidance on Procedures for Approving Direct Action Against Terrorist Targets Located Outside the United States and Areas of Active Hostilities (PPG). Put into place under the Obama administration, the PPG established standard operating procedures for circumstances when the US takes direct action (including drone strikes or raids) against terrorist targets outside of the US and outside of areas of active hostilities. The PPG restricted the use of lethal force to targets that pose a “continuing, imminent threat to US persons” and for whom capture is not feasible at the time of the operation, and requires “near certainty” that the target is present and that non-combatants will not be injured or killed. The PPG further required that decisions to capture or use lethal force against terrorist targets outside areas of active hostilities be made at the highest levels of government, requiring consultation among agency heads and either notification or approval of the President depending on the nationality of the target and the level of interagency consensus. The Trump administration has reportedly relaxed some of these requirements through new guidance, including allowing the use of lethal force against non-high-value targets and eliminating the requirement for high-level vetting and approval. The requirement of “near certainty” that no civilian casualties will occur, however, has reportedly been maintained. Under President Obama, Syria, Iraq, Afghanistan, and temporarily parts of Libya were considered areas of active hostilities. Sources overseeing operations say that President Trump has added, in part or whole, Libya, Yemen, and Somalia to this list, rendering operations in these areas not subject to the requirements of the PPG or its successor policy guidance.

Executive Order: United States Policy on Pre- and Post-Strike Measures to Address Civilian Casualties in US Operations Involving the Use of Force. Unlike the PPG, the civilian casualties executive order (EO) does not direct when or where the US should use force. Rather, the EO provides policy guidance on the prevention and mitigation of civilian harm before and after the use of force, including training on mitigation measures; engagement with the International Committee of the Red Cross (ICRC) and non-governmental organizations (NGOs) to assist in distinguishing civilian and military targets; acknowledging US responsibility for harm and offering amends; and consolidating lessons learned. The EO also instructs the Director of National Intelligence to publicly report information about strikes undertaken by the US government against terrorist targets outside areas of active hostilities (i.e., those under the PPG), including the assessed range of combatant and non-combatant deaths resulting from those strikes.

The US government relies on the following authorizations for current operations, as stated in the December 2016 White House Report on the Legal and Policy Frameworks Guiding the United States’ Use of Military Force and Related National Security Operations.

Afghanistan. Designated an area of active hostilities, the use of force against al-Qaeda and Daesh was authorized domestically by the 2001 AUMF and internationally as an act of self-defense in response to the 9/11 attacks. The Bilateral Security Agreement between the US and Afghanistan further provides the consent of the government of Afghanistan.

Iraq. Designated an area of active hostilities, the use of force against Daesh was authorized domestically by the 2001 AUMF and the 2002 AUMF (Authorization for the Use of Military Force Against Iraq). Internationally, ongoing operations occur with the consent of the government of Iraq and are considered an act of self-defense.

Syria. Designated an area of active hostilities, the use of force against Daesh and al-Qaeda in Syria was authorized domestically by the 2001 AUMF (and in certain circumstances, the 2002 AUMF) and internationally as an act of collective self-defense for Iraq and for the U.S, among other States. The Syrian government is considered unable and unwilling to effectively confront the threat posed by Daesh and al-Qaeda in Syria.

Somalia. Operations against al-Shabaab were authorized domestically by the 2001 AUMF and conducted with the consent of the government of Somalia in furtherance of US national self-defense.

Libya. Operations against Daesh were authorized domestically by the 2001 AUMF and conducted with the consent of the Government of National Accord in furtherance of US national self-defense.

Yemen. Operations against al-Qaeda in the Arabian Peninsula (AQAP) were authorized domestically by the 2001 AUMF with consent of the government of Yemen. 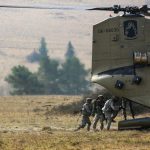