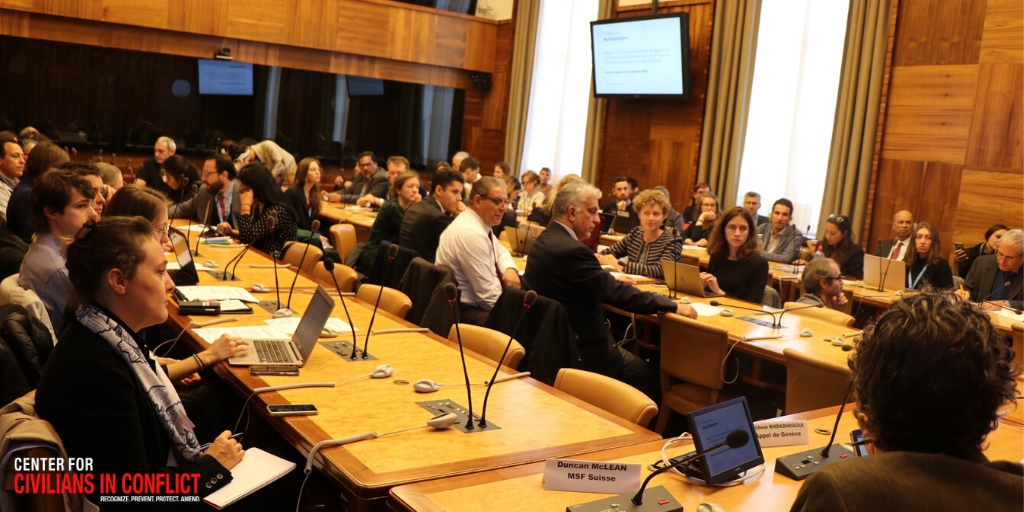 In November 2019, CIVIC’s Europe Director Beatrice Godefroy spoke at the French-German panel at Geneva Peace Week 2019 on the protection of humanitarian and medical workers in conflict zones. This event was to contribute reflections from the joint “Humanitarian Call for Action” that was launched by Foreign Ministers Heiko Maas (Germany) and Jean-Yves Le Drian (France) in New York on April 1st 2019; the goal of this Call to Action is to strenghten respect for international humanitarian law (IHL) and principled humanitarian action.

Looking back at my own experience, I realized that the discussion on protecting humanitarian workers is sadly still timely, as my last 20 years in this field have been sprinkled with tragic incidents. From the cold-blooded execution of 17 of my Action Contre la Faim (Action Against Hunger) colleagues in Sri Lanka in 2006, to the bombing of the Médecins Sans Frontières (Doctors Without Borders) Trauma Center in Kunduz, Afghanistan in October 2015, humanitarian workers continue to face life-threatening risks around the world. And of course at CIVIC, we unfortunately have a deep sense of the dangers frontline workers are exposed to : our founder, Marla Ruzicka, a young activist and humanitarian, was killed in Baghdad, Iraq in 2005.

Harm caused to humanitarian workers cannot be separated from broader conflict dynamics, patterns of civilian harm, and violations of international humanitarian law (IHL). Attacks against humanitarian workers reflect the climate of violence and impunity against civilians, civilian objects, and protected infrastructures including medical facilities, patients, and staff during war. Risks are unacceptably high for all civilians – including humanitarian workers – in environments in which armed opposition groups are present, as well as where international, regional, or national forces are operating. Increasingly, these armed groups disregard their obligations under IHL and directly target civilian populations and humanitarian staff.

The entire humanitarian community is concerned by this worrying trend, including the UN, international NGOs, and local civil society. Even if critical data is missing to better quantify and understand current trends, available information shows that national staff of humanitarian organizations are the most exposed to a variety of risks, such as harassment, physical and psychological harm, intimidation, and damage to critical infrastructure.

In spite of the multi-lateral stalemate on reinforcing compliance to IHL and accountability on violations, at CIVIC we believe that there is a large spectrum of best practices and policies available to national governments and armed forces to reduce, mitigate, and prevent harm to civilian populations and their ‘protectors.’

Humanitarian workers and civilians suffer from both incidental and intentional harm in conflict and other situations of violence. To strengthen the ability of humanitarian workers and avoid future tragedies of people providing aid, the UN, state actors, and armed forces need to adopt these principles to best protect all civilians.

This blog was co-authored by Beatrice Godefroy and Raphaelle Samama