Op-Ed: Peacekeeping Under Trump Could Be Difficult With Less Resources

On Monday, President Trump will chair a high-level panel on United Nations reform, kicking off the annual United Nations General Assembly (UNGA) meeting. Peacekeeping reform is badly needed and should be part of that discussion. Smart cuts to the U.N.’s budget could spur needed changes, but so far, the Trump administration’s focus has been primarily about reducing costs at any cost — a move that threatens to leave peacekeeping missions in countries like the Democratic Republic of Congo (DRC) unable to respond to increasingly dire crises.

Read the rest at: Peacekeeping under Trump could be difficult with less resources | TheHill 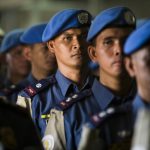