Child crouching next to bags or ‘kits’ of non-food items (NFIs) distributed to IDPs. NFI kits typically include kitchen items, blankets, mats, and a bucket.

Life is difficult for internally displaced persons (IDPs) in Tarnol—a slum outside of Islamabad.  It is a dusty, desolate place on the outskirts of the city.  Its streets are narrow and unpaved, lined with cramped homes, many held together by earthen bricks and animal dung.  Most of the displaced are crowded into relatives’ homes or renting small rooms.  They struggle to sustain large, extended families on less than $2.50 a day—the amount men can earn unloading trucks in nearby industrial areas.

Tens of thousands of IDPs, mostly from Swat Valley and Bajaur Agency, have settled in slums such as Taronl all around Islamabad.  Along with millions of others, they were forced to flee their homes because of fighting between the Pakistani military and Taliban-aligned militants.

Children of displaced families watch the distribution of NFI kits to a growing crowd of IDPs.

I visited Tarnol with a Pakistani NGO, SHARP, which works with UNHCR to distribute non-food items to IDPs, such as buckets, blankets, and mats.  By the time we arrived at the distribution point, a crowd of around a hundred men had already gathered.  As the distribution got underway, it became clear that around half would not receive anything because they were from a different area and SHARP could not verify their registration.  Intense negotiations with community elders ensued and the crowd grew increasingly agitated.  Men with wooden clubs stood outside SHARP’s small office, attempting to keep control.

Despite the aid distributed, the desperation of the people was evident.  In an unfamiliar city, far away from their villages and farms, many families are dependent on the meager and sporadic aid provided by relief agencies.  They want to return and resume their lives but continuing insecurity and lack of money prevents them from doing so.  In the meantime, many fear what has happened to their homes, property, and businesses—and how they will rebuild once they return. 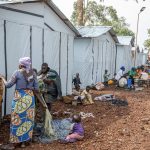 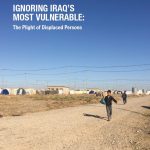 By Center for Civilians in ConflictDecember 4, 2009