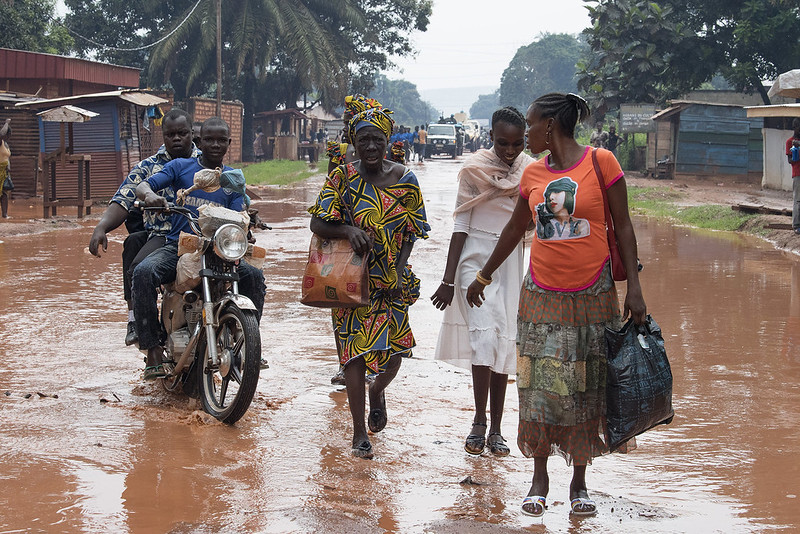 Modern UN peacekeeping operations must safely and effectively engage local communities to successfully implement their objectives, in particular mandates to protect civilians from physical violence. Community Liaison Assistants (CLAs) serve in UN peacekeeping missions to support engagement with local communities. The UN Peacekeeping Mission in the Central African Republic (known by its French acronym MINUSCA) relies on 78 CLAs to perform critical protection of civilian tasks and has taken a number of steps to strengthen communication and coordination between CLAs and the Mission’s uniformed personnel. These steps could serve as a good practice for other peacekeeping missions.

CLAs are national, civilian personnel hired by a UN peacekeeping mission from the country where the mission is deployed. CLAs not only speak local languages, but also navigate unwritten social norms that often vary between different population groups, contributing to a mission’s situational awareness and understanding of the context. Oftentimes, in the Central African Republic (CAR), CLAs are the primary interface of the Mission with communities and local authorities. Moreover, in some mission locations, CLAs are the only civilian staff deployed to support the implementation of three of MINUSCA’s mandated priority tasks: the protection of civilians (POC) through strengthening early warning systems, local mediation and dialogue mechanisms, and support to the restoration of State authority.

As of July 2020, MINUSCA has deployed 78 CLAs in 44 locations.[1] Their work falls along three lines of effort, namely liaising with communities, collecting information from communities, communicating the Mission’s priority messages to ensure an ongoing dialogue between the Mission and the population, and supporting the implementation of local POC strategies. For example, CLAs play a central role in local-level protection planning by supporting the development of Community Protection Plans (CPPs). The 44 CPPs, which are integrated in the Mission’s Early Warning and Rapid Response system, help the Mission to assess POC risks for a given area, providing the Mission with an overview of the security situation by consolidating input from community members and local authorities on perceived threats to the civilian population and on specific vulnerabilities of communities at risks of violence.

Moreover, within the Mission, CLAs have the lead on establishing and rolling out Community Alerts Networks (CANs). CANs are often the primary source of information on imminent threats to civilians. Information from the CANs is transferred to the Mission’s military component for triangulation. Since 2015, CLAs have established 59 CANs, consisting of more than 3,560 volunteers (1,044 women and 2,516 men) by creating connections with local community members and have provided the CANs with training on how to report potential threats to civilians to the Mission. Civilian components of the Mission also rely on CLAs and CANs to document cases of violence and/or to triangulate information received to support their monitoring work. As one MINUSCA civilian officer told CIVIC, “In locations where we do not have officers (from our section), we rely on CLAs… We explain what collaboration is expected and then CLAs share with us information relevant for our work.”[2]

Over the last year, CIVIC has undertaken research in CAR’s capital Bangui and four field locations in the country. When visiting different locations, CIVIC found widespread agreement among MINUSCA staff regarding the value of CLAs in supporting both uniformed and civilian personnel. However, the cooperation between CLAs and uniformed personnel in a peacekeeping mission is not straightforward. Military personnel may not have any previous experience working in integrated and multidimensional peace operations,[3] and as such need guidance, training, and time to understand and adapt to working in close coordination with the Mission’s civilian personnel, including CLAs. Unfortunately, they may not receive that guidance or training before deploying to a mission context and will likely rotate out of their post after six months or a year. “At first, it is not easy for peacekeepers to understand CLA’s role and what we should expect mutually,” a Force official deployed in the field told CIVIC, “but when patrols go out with CLAs, soldiers can better interact with communities as CLAs pass messages and report back information that is vital… In fact, you soon realize that the biggest challenge with CLAs is that their number is not sufficient as we have to cover multiple hotspots at the same time.”[4]

Similarly, CLAs may not have experience working closely with military personnel. One CLA stressed this point by acknowledging that, “by increasingly working along with the Force, often deployed in [temporary operating bases], I better understood challenges that soldiers face in CAR. I could see that often times they were overstretched in order to cover several areas and when it comes to tasking, we [the Mission] ask them too much in relation to their capacities.”[5]

Over the past few years, MINUSCA has taken several steps to strengthen cooperation between CLAs and uniformed personnel while reinforcing the number of CLAs to reach out to remote locations increasing the number of CLAs from 52 in 2018 to 78 by the middle of 2019. Furthermore, the Mission conducted an assessment (hereafter referred to as the assessment) of the extent and type of cooperation that occurred between CLAs and uniformed personnel during the first years of the Mission. The assessments findings included but were not limited to the need to increase the number of CLAs, to ensure greater diversity in terms of the gender and ethnicity of CLAs, to provide additional trainings to reinforce CLAs’ capacities, and to develop a process to monitor and evaluate CLAs performance over time.

Following the evaluation, MINUSCA initiated a number of reforms to address the findings and recommendations of the assessment. MINUSCA created a standard operating procedure (SOP) in 2018 that clearly defined the roles and responsibilities of CLAs and uniformed personnel, including police and military. In order to promote a more integrated approach to POC, the SOP highlights the complementarity of tasks performed by CLAs and uniformed personnel.

MINUSCA’s Civil Affairs Section (CAS) took additional steps to respond to the recommendations in the assessment and support the work of CLA’s. The CAS hired 26 new CLA’s. While recruiting the new CLAs, CAS sought to address the lack of gender and ethnic diversity among CLAs now having a total of 16 female CLAs. A lack of diversity can undermine a mission’s ability to engage with a diverse population, especially when there may be ethnic or gender dimensions to a conflict. CAS also reinforced its capacity to coordinate activities among the growing number of CLAs by strengthening its management structure. For example, CLA coordinators are deployed at the field level, while a dedicated team within the CAS is based in the Mission’s headquarters to collect and manage information from the field to ensure strategic oversight. The CAS also developed additional induction training for CLAs and MINUSCA’s uniformed personnel to address the lack of understanding of roles and complementary responsibilities between civilian and uniformed components. In addition, the CAS developed a monitoring and evaluation system to comprehensively track and analyze the implementation of the recommendations in the assessment to support the enhancement of CLA’s performance. Finally, CAS and MINUSCA’s military component now undertake a yearly joint assessment on collaboration between CLA’s and the military and produce an analytical report on progress. Thus far, this joint assessment has been completed in 2018 and 2019.

CIVIC’s initial research indicates that there are still a number of challenges that MINUSCA will need to address to ensure CLAs can safely and effectively support the Mission. Chief among these are the need to improve the working conditions and security of CLAs and to provide CLAs with the resources they need, such as increasing access to radios, phones, and the internet, which are critical to communicating effectively. Nevertheless, the Mission’s efforts to strengthen the role of CLAs has demonstrated results and the CAS and MINUSCA’s Office of the Force Commander, which are responsible for adherence to the SOP, are monitoring progress in implementing the assessment’s recommendations to increase an integrated approach to collecting and verifying information as well as planning and implementing activities.

[1] In 12 locations, MINUSCA has Permanent Operating Bases and field offices, which include civilian staff. In the other 32 locations, CLAs are the only civilian staff working alongside MINUSCA’s military contingents in Temporary Operating Bases. [2] CIVIC interview with MINUSCA officer #45, Bambari, September 2019 [3] The term multidimensional refers to peacekeeping operations that have civilian, military, and police components that promote peace and security and “facilitate political processes, protect civilians, assist in the disarmament, demobilization and reintegration of former combatants; support the organization of elections, protect and promote human rights and assist in restoring the rule of law.” This definition was adapted from  https://peacekeeping.un.org/en/what-is-peacekeeping. The term “integrated” sometimes refers to a mission’s diverse components working together, and more often to the integration of UN agencies, funds, and programs in UN peacekeeping operation’s planning, coordination, and reporting lines.    [4] CIVIC interview with MINUSCA military official #72, Bouar, October 2019 [5] CIVIC interview with MINUSCA CLA #86, Bangui, November 2019
Image courtesy of UN Photo/Eskinder Debebe
Related Content