Arifa had lost nearly everything when Marla Ruzicka walked through the door and into her life. The American intervention in Afghanistan had started just weeks before. A US bomb missed its target by three miles and landed instead on Arifa’s home, leaving her a widow at the age of 30. She buried her husband, eldest son and six other family members under small, chipped stone markers on a dirt street outside Kabul.

Read the article in full on The Nation’s site

Honoring Marla Ruzicka: One individual who changed war for many 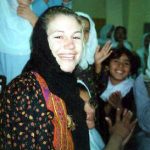