It’s hard not to be inspired by the story of Izzeldin Aboul Aish.

A doctor who received his Master’s of Public Health from Harvard, Aboul Aish returned to Gaza to raise his daughters and help his people. He is widely known from his television appearances and practice in Israel.

Aboul Aish had always preached peace and bridge building. So it was a special outrage and injustice that Israeli tanks fired on his home as part of an operation to demolish buildings suspected of housing Hamas fighters. Three of his five daughters and his niece were killed.

A summary of his heartbreaking story:

During last summer’s siege of Gaza, tanks approached Aboul Aish’s house. He quickly drew up a list of high-level contacts in the IDF and called a few. The tanks shortly withdrew from his home.

The following day, though, Aboul Aish wasn’t so lucky. Israeli tanks shelled his home and killed three of his daughters and his niece before he had a chance to call his friends in the IDF.

He placed this call to his friend, a TV news host, immediately after the attack.
(warning: this is deeply emotional and jarring).

Aboul Aish’s story of suffering is sadly not uncommon in Gaza. What is uncommon is Israel’s response to his tale of woe.

First, then-Prime Minister Ehud Olmert said he wept for Aboul Aish, a public show of sympathy we’re unaccustomed to seeing from policymakers in war. This week, Aboul Aish revealed that Israel has offered him compensation for his loss.

To my knowledge, and the knowledge of my colleagues at CIVIC, Israel has never before made such amends to a civilian victim of its military operations. Aboul Aish says he will use the funds to start a foundation to help Gazan women and girls. Amazingly, he refuses to lay blame or impugn the motives of either Israel or Hamas. Instead, he soldiers on, preaching peace and reconciliation to Jews, Christians, Muslims, and anyone else who will listen.

It’s clear that the decision to compensate Aboul Aish was driven partly by emotion and partly to satisfy public outrage and guilt in Israel. It shouldn’t end there. There’s a powerful case for Israel to make amends to all civilians they admit to harming by mistake. First, it’s clearly the right thing to do. Combat operations in war, even if conducted with the greatest possible degree of care, harm civilians. While no amount of compensation can ever make up for the loss of life, the Israelis should not leave civilians to pick up the pieces without help. They should internalize the human cost of their military operations.

Second, making amends to civilians is the smart thing to do. To this point, Palestinians have little reason to believe that Israelis aren’t simply indifferent to their suffering (Aboul Aish, whose faith compels him to assume everyone’s best intentions, is an exception). Indeed, Israelis have given them little reason to believe otherwise, prohibiting even the most basic supplies, such as building materials, from being brought into Gaza. Helping civilians sends the opposite message. It quells resentment, increases the potential for cooperation, and decreases the risk of retaliation. The United States, which maintains both compensation and humanitarian aid programs for war victims in Afghanistan and Iraq, is recognizing the benefits of this policy of compassion. Israel should follow suit.

At the moment, when states engage in operations that have disproportionate impacts on civilians or deliberately target them, these civilians may receive reparations for the state’s breach of International Humanitarian Law. But if warring parties engage in lawful military acts that result in “collateral damage,” the international community says, “tough luck.” I’m currently working on a new campaign to change that, to create a global expectation that all warring parties must help where they have harmed, whether or not they’ve broken the laws of war (to get in touch on this, my contact these days is my first name at civicworldwide.org). Israel, which claims that the vast majority of its civilian victims are regrettable but legal casualties, should take the lead here.

Let’s be clear: making amends to unintentional victims would only solve a small part of the problem. Israel claims many of the injured civilians are actually shielding Hamas fighters; as such, these civilians would not be eligible for compensation. Nor would amends be offered by Hamas to the Israeli civilians it intentionally targets. Making amends would, however, bridge a small part of the gap between the parties and ease some of the suffering that everyone wants to avoid. In other words, it’s a start.

It took the compelling story of Aboul Aish for Israel to compensate a civilian victim. Making amends to all civilians would be one way to honor his courage, not to mention an act of intelligence, decency and compassion. 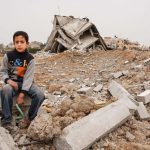 By Center for Civilians in ConflictJune 12, 2009