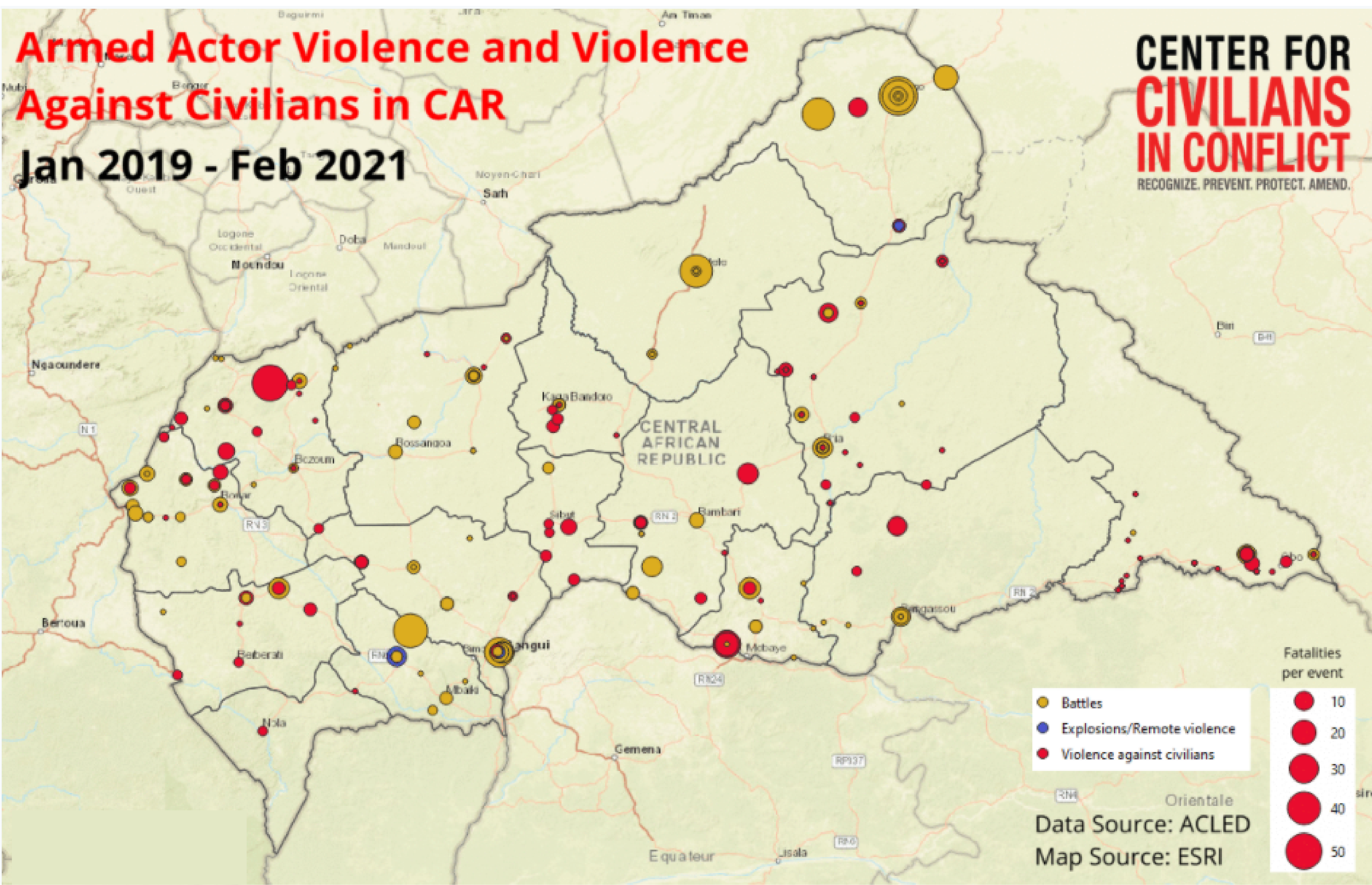 By Viola Giuliano and Josh Jorgensen

On February 16, 2021, the United Nations (UN) Secretary-General recommended that the UN Security Council authorize an additional 3,690 uniformed personnel to reinforce the UN peacekeeping operation in the Central African Republic (MINUSCA). Tomorrow, the Under-Secretary-General (USG) for Peace Operations will brief the Security Council on the situation in the Central African Republic (CAR). Security Council members should use the briefing as an opportunity not only to support the request for increased military and police personnel, but to call on the UN Secretariat and MINUSCA to take additional steps to sustainably strengthen the Mission’s ability to protect civilians. Deploying more troops and police to MINUSCA will only help end the conflict if there is a commensurate focus on improved Mission performance; adequate civilian capacities to support integrated threat assessment, planning, and decision-making; and a revised political strategy that prioritizes the protection of civilians.

Presidential and legislative elections in December 2020 triggered a new cycle of violence in CAR when major signatories of the peace agreement merged into a new opposition coalition to disrupt the polls and seize power from the government. As they took control of towns across CAR and advanced on the capital, the rebels forced 40% of polling places to close, and only 35% of voters were able to cast their ballots. Armed groups also destroyed ballots and electoral material and physically assaulted voters, such as in Bambari.

MINUSCA’s ability to respond to attacks was limited. Only 12% of the national army (FACA) that was supposed to provide election security had actually deployed, and as the violence unfolded the majority of the national army collapsed as soldiers defected and abandoned posts. In many cases, members of FACA sought shelter in MINUSCA bases. The opposition coalition was only prevented from overwhelming the government through CAR’s bilateral security partners (Rwanda and the Russian Federation) and the Security Council’s quick reinforcement of MINUSCA with 300 troops from the peacekeeping mission in South Sudan. However, all these capacities are intended to be temporary, and the search for a more sustainable solution is urgent.

Following the outbreak of violence, the UN Special Representative of the Secretary-General (SRSG) to CAR briefed the Security Council and acknowledged the danger of losing precarious gains toward peace that had been achieved over a number of years with large investments by the international community. To prevent this loss, he asked the Council to consider approving additional uniformed personnel to reinforce MINUSCA. During the briefing, several Council members expressed willingness to discuss strengthening MINUSCA’s capacities. Council members’ unified support provides a unique opportunity to address the longstanding operational gaps between the tasks that the Mission is mandated to accomplish and the capabilities at its disposal. Going forward, Council members should work with the Secretariat and MINUSCA to ensure that additional capabilities will sufficiently and sustainably increase the Mission’s ability to protect civilians.

Strengthening MINUSCA’s capacity to fulfill its critical protection of civilians mandate is not just a matter of increasing troop and police numbers. The Security Council should approve the Secretary-General’s request for higher troop and police ceilings contingent on three priority conditions: the right types of capabilities, better integrated action, and maintaining civilian capacities.

First, MINUSCA clearly needs more troops. The Mission was already overstretched, and then needed to deploy all its quick reaction and reserve forces to respond to election violence. Given the vastness of the country and the severe lack of infrastructure, assets to increase situational awareness and troop mobility will be vital to ensure that uniformed personnel can rapidly identify and respond to emerging threats while maintaining a flexible posture though prompt redeployment when needed. The Mission’s request for troops includes eight infantry units, military staff to perform analysis and planning, engineers (capable of deploying mobile bridges), helicopters, and unmanned aerial vehicles (UAVs) for reconnaissance and surveillance.

MINUSCA’s troop contingents – some of the same units that could be reinforced under the Mission’s request – have had challenges in the past with performance and accountability, and with conduct and discipline, including perpetrating sexual exploitation and abuse. A preeminent concern now will be to generate and deploy units with good records of performance and discipline. The UN must use its established mechanisms to ensure force generation is not only rapid but deploys units that will proactively protect civilians and not harm them.

Second, the Security Council should ensure that increased uniformed capacity is used to support a whole-of-mission approach to address the conflict and to protect civilians. The value of additional uniformed capabilities will be limited if the Mission’s integrated capabilities aren’t also strengthened. Some key integrated functions include threat assessment, planning, and decision-making mechanisms which require both civilian and uniformed expertise.

Third, if Security Council members support increasing MINUSCA’s troop and police ceilings, they should simultaneously work with the Secretariat and through their Fifth Committee delegates to ensure the Mission will not be pressed to reduce civilian staff or other resource priorities to make room for an expanded troop and police budget. In 2017, the Council’s authorization for the deployment of an additional 900 troops within existing Mission resources resulted in the Mission cutting civilian personnel and related capabilities. The UN has found that the Mission’s civilian capabilities in the field were already overstretched prior to the current emergency. The Mission should request and the Fifth Committee should approve the resources required to support additional uniformed and civilian personnel.

Redefining and leveraging a political strategy that prioritizes civilian protection

A new Mission political strategy should prioritize the protection of civilians and emphasize civilian-centered approaches in political and peace processes to break the monopoly of elites—whether from the government, opposition parties, or armed groups—over political discussions and peace dividends. The Council should keep in mind the three tiers of protection, and that MINUSCA’s efforts to protect civilians in CAR through dialogue and engagement and supporting a protective environment– not just physical protection – also require resources and capabilities.

Despite calls by the President of CAR for unity, concrete signs of inclusion and engagement of opposition parties in a national dialogue have yet to materialize. If not tackled through an inclusive approach, a post-election political crisis has the potential to further polarize stakeholders, including the public, making any political solution increasingly difficult. MINUSCA should increase the use of its good offices to bring civilians’ voices into the peace process and interrupt the focus on dissent by political spoilers. Without a genuine and inclusive exercise to restore legitimacy, political instability will only increase, making it difficult for the new government to operate and even harder for MINUSCA to deliver on its mandate.

When it meets on February 24, the Security Council has an opportunity to help MINUSCA by sending a unified message regarding the need for better integration, improved performance, and a revised political strategy that prioritizes the protection of civilians. The Mission needs more troops and police, but their deployment will only help end the conflict if there is an equal focus on a whole-of-mission approach to protecting civilians and using all the Mission’s leverage to support political solutions to conflicts in CAR.