GUEST BLOG: Waking up in Afghanistan

Posted By: Ana, working on human rights issues in Afghanistan

Just as any other morning my driver was waiting for me outside. I got into the car hoping that my coffee-mug will ease the misery of an early Saturday morning pick-up. Our usual greeting routine was full of how are you and how was your weekend. “We had a lot of guest,” he said. I was still on the autopilot barely paying attention to the conversation. He continued, “it was a year since my brother died, I was busy with shopping and other things.”

My sleepiness was gone in no time. I didn’t know how to react. “He was so young.” I heard my pathetic “I am sorry to hear that.” He didn’t notice, “I still remember that day, sometimes I wake up crying. I see his blood on me.” We overtook a police car, and then got stuck at an intersection. “He went out to get some bread for the morning. And when he was outside a convoy passed by our street, and a suicide bomb exploded. I heard it and ran out to see what happened, but the police would not let me through.” The jam started to move, we made another swerve and accelerated. “I saw him lying on the ground and I yelled that is my brother let me through, that is my brother. So the police let me in. I picked him up and brought him to our car. I drove him to a hospital, but he died in my hands.” “He was badly damaged?” “Nothing in his body was hurt, but a piece of bomb was stuck behind his ear. Doctors said that that is why he died. Nothing else was seriously hurt.”

We drove sometime in silence. Tears started rolling out of my eyes. I saw him clenching onto the steering wheel. His face was frozen with pain seeping through. “He was two years younger than me. He was twenty-two.” “Did he marry?” “No.” He let out a deep sigh. “I am the only son left. I still think about him. I sometimes wonder why did he go to get bread?” He stared at the road; we were approaching another jam; he drove over the curb to jump traffic. “May be I should’ve gone to get the bread.” Now we were racing against other cars. “The people who were supposed to be killed were not hurt, but my brother… I still see him lying in my arms.” We arrived to the office. “Four o’clock?” he said. “Yes, today is four o’clock.” I signed the logbook, got out of the car, walked to my desk. I sat there staring at my coffee mug. I no longer needed it to be awake. 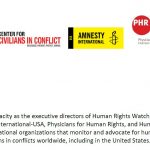 US: Protect Peaceful Assemblies; Limit Use of Force

By Center for Civilians in ConflictMay 15, 2008