Grave concern for civilians in Afghanistan

The situation for them is becoming untenable. This, after many decades of war has ripped through their land. Over and over we’ve heard calls from President Karzai to stop the needless violence. In the streets, Afghans have protested the deaths of their loved ones. And today, the Agency Coordinating Body for Afghan Relief (or ACBAR) released a wake-up call for ALL the warring parties. The brief report begins:

“We, the 100 national and international NGO members of ACBAR, express our grave concern about the deteriorating security situation in Afghanistan and the serious impact on civilians.”

It’s a strong declaration on behalf of so many Afghans that cannot speak for themselves. Now it’s up to the warring parties to listen. According to ACBAR’s report, there has been a surge of civilian casualties caused by all groups (the Taliban, international and national forces, militants). Areas that were stable are now unraveling. 260 civilians were killed or injured last month — that’s more than any other month in the entire six years of this conflict. Schools and health facilities are closing, development projects are shutting down, and families are leaving their homes causing massive displacement. Humanitarians are being threatened or attacked… just this year nineteen NGO staff have been killed. We check on our own in Kabul every day, but are increasingly wary of what’s happening.

So what to do?

The humanitarian community (and slowly, the militaries too) has long known that conflicts that so heavily involve the civilian population cannot be brought to an end through military means alone. A sustainable peace has to come from a willingness of the people – and the will of the Afghan people is currently being bent to the breaking point. ACBAR’s pleas to the warring parties are in line with the basic tenants of the Laws of War: distinguish between civilians and combatants, never use civilians as human shields, never attack a humanitarian, never take hostages. That these principles have to be reiterated is a sign of just how bad things have become.

ACBAR also calls for “timely and adequate compensation and assistance to civilians who have suffered as a result of the conflict.” I can’t overstate how important this is to Afghans who’ve lost loved ones. It’s the least we can do to help restore some of their dignity. We join with ACBAR in their calls for protection and help to civilians. It’s time all warring parties in Afghanistan heed them. 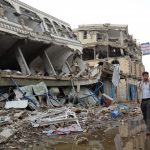 By Center for Civilians in ConflictAugust 1, 2008