Give Local Civil Society a Say in U.S. Security Assistance

Each year, the United States spends $19.5 billion a year on security cooperation and assistance, more than 130 countries and territories in the world spend on their entire defense budgets. Not surprisingly, in the period since Sept. 11, 2001, U.S. funding has increased markedly for security partnerships focused on countering terrorism and addressing internal security challenges in partner states.

Such external support for government-controlled security institutions has a direct bearing on local political and social dynamics, regardless of the intention, especially where governance is poor and human rights violations are rampant. Yet the vast preponderance of decisions relating to U.S. security cooperation and assistance programs are made through arrangements between the U.S. government and its government partners, with scant local engagement with others who would be affected inside the partner country, including independent civil society.

Having Their Say: Guidelines for Involving Local Civil Society in the Planning, Design, Implementation, and Evaluation of U.S. Security Assistance and Cooperation 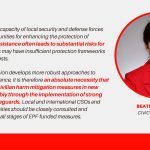 Civil Society Experts, Analysts, and MEPs in Europe and Africa Raise Concerns with the EU Adoption of the European Peace Facility (EPF)