March 19, 2009By Center for Civilians in Conflict

We wouldn’t usually be involved in the planning of a military operation, not in the real world. And yet here we are at Ft. Leavenworth role playing an NGO, with access to everyone from Special Ops and logistical support teams to the Commanding General.  It’s a tribute to the US military and how far its thinking has progressed that the role of an NGO is considered vital to the training of staff officers.

Day to day, we’re asked to comment on refugee issues, limiting and addressing civilian casualties, and what line – thin or thick – is appropriate to separate humanitarian and military efforts. I’ve found the officers from all four branches of the US military (Air Force, Army, Marines and Navy) receptive to our concerns. What’s more heartening is that they’re already thinking progressively about these non-traditional military issues; not surprising, as most have served two, three and four tours in Iraq or Afghanistan.  We’ve spent a week here teaching what we know and learning what we didn’t.  The give and take alone is a tremendous opportunity for us, and I hope for these officers. 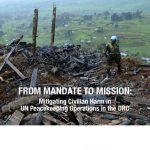