False promises are at the heart of making war. In August 1914, German and British soldiers were sent to the front on the false promise they would be home by Christmas, as were American soldiers shipped to Korea 36 years later. The Vietnam War and Iraq War were both started and sustained by false promises of purpose and outcome. In the 1960s, U.S. Army Gen. William Westmoreland spoke of a “crossover point” to victory in Vietnam, and during his presidency George W. Bush promised “peace in the greater Middle East” by means of war in Iraq. The “global war on terror,” as Bush termed it, came with its own false promises, including the idea that so-called precision airstrikes could kill only terrorists—and not families attending a wedding party.

As the United States emerges from the shadow of the forever wars into a new era of superpower competition where war between the great powers is thinkable again, it seems to be preparing for the next war on the basis of a particularly dangerous false promise: that large numbers of civilians, including in major population centers in Asia and Europe, won’t be affected by it. 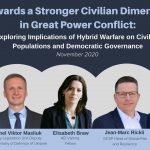