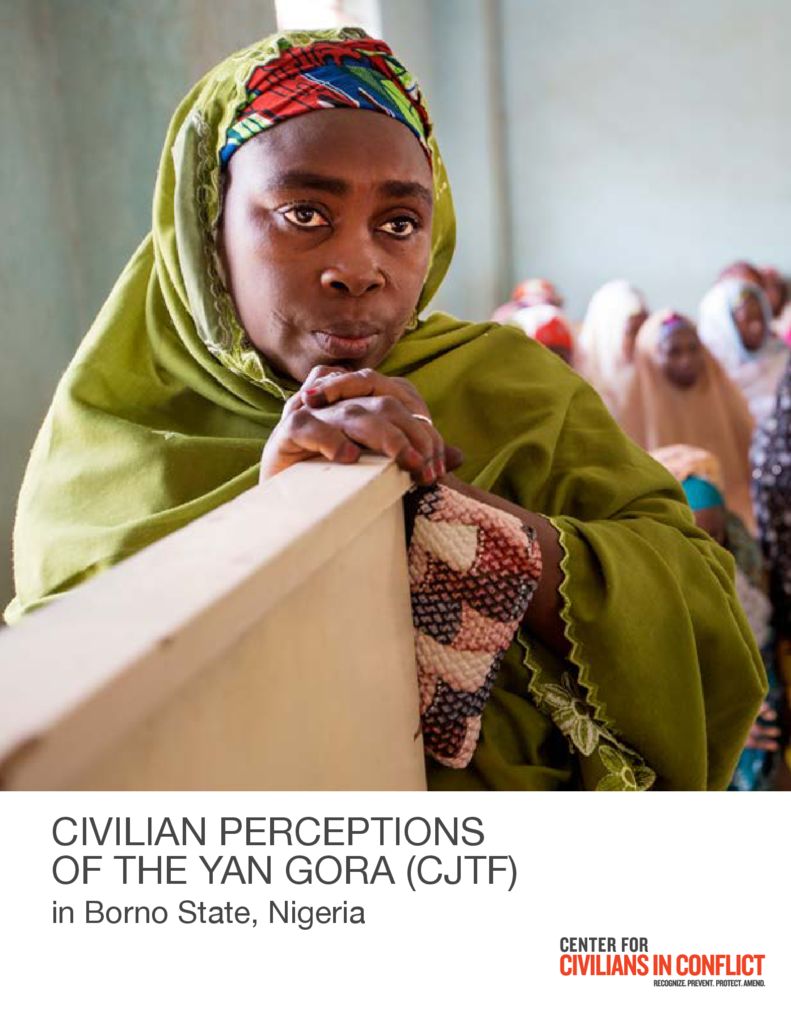 In our VOICES blog, we share regular updates from our global programs, including CIVIC’s Africa and Peacekeeping Teams. This piece was written by CIVIC’s Sr. Program Advisor for Nigeria, Chitra Nagarajan, with input from Bénédicte Aboul-Nasr, former Peacekeeping Program Associate.

In northeast Nigeria and the Lake Chad Basin, civilians mobilized to push back against armed opposition groups (AOGs), forming their own self-defense groups to fill fatal gaps in the Nigerian military’s response. CIVIC’s recent report, “Civilian Perceptions of the Yan Gora (CJTF)” focuses on how civilians view one of these groups: the yan gora, also known as the Civilian Joint Task Force (CJTF). This is the first such report on protection dynamics around community militias operational in Borno state, to be followed by additional research into other groups later this year.

As outlined in the CJTF report, while the desire to protect communities from harm is understandable and civilians interviewed talk of ways the yan gora continue to protect them, the CJTF has increasingly been accused of committing their own abuses against civilians, which may ultimately perpetuate the conflict.

Amidst the violence of AOGs and the harms caused by the national military sent in to defeat these groups, many believe that the CJTF was born as a “child of necessity.” Beginning in Maiduguri in 2013, the model spread to other towns and cities in the northeast. The CJTF enjoyed widespread support among community members and was largely credited for driving Jama’atu Ahlis Sunna Lidda’awati wal-Jihad (JAS) from Maiduguri and the recapturing of some towns from AOGs’ control.

In our interviews, civilians gave credit to the CJTF for bringing back some stability and safety to Borno state. The CJTF was seen as proactive in investigating reports received from community members, sharing information with the community, and serving as a bridge between communities and security forces. The CJTF has also been engaged in patrolling communities, together with the military, doing security scans and body searches, running checkpoints and conducting patrols and screening people to ensure community welfare and peace of mind. The CJTF has further served communities by assisting people to safety, helping resolve disputes, and promoting livelihoods by, for example, escorting community members to their farmlands.

At the same time, all civilians interviewed by CIVIC pointed to concrete ways the CJTF harms civilians. For example, CJTF members have been involved in assaulting and killing people thought to be associated with AOGs, with those from certain areas and outside local government headquarters attracting particular suspicion. According to our interviews, some CJTF members also restrict movement in and out of IDP camps to those willing to pay bribes or do sexual favors. Civilians interviewed by CIVIC allege that those who have ‘boyfriends’ in the CJTF are able to freely enter and leave the camp as opposed to those who do not. Moreover, CJTF members intimidate civilians, employ punitive justice measures to settle personal scores, trade drugs, and have been implicated in the commission of extortion and theft, including the diversion of humanitarian aid. Every civilian interviewed spoke of cases of sexual harassment, exploitation, and abuse committed by the CJTF. Civilians felt that opportunities for redress for harm largely did not exist, saying they felt unable to take cases to the police or military as those entities work closely with the CJTF. In cases when civilians did bring cases to police or military officials, they were told to exercise patience rather than receive justice.

The emergence of the CJTF has not been uniformly positive for security either. While Islamic State West Africa, which split from JAS in 2016, does not tend to engage in collective punishment, JAS has retaliated against communities where self-defense groups emerged.

CIVIC’s research also surfaced significant concerns among civilians about increasing politicization and mobilization around Nigeria’s 2019 elections, with worries that the CJTF’s involvement with politicians was diluting militia members’ focus on protection. Further, civilians expressed concern that the CJTF would become increasingly involved in criminality and gangs and could derail processes of disarmament, demobilization, reintegration, and rehabilitation. Many of the civilians interviewed expressed alarm about increasing tensions within the CJTF as well as between the CJTF and other community militias.

Without a deliberate strategy to address the CJTF, there is a risk that community self-defense groups will evolve into a new phase of the conflict. As the violent conflict enters its tenth year, now is the time to acknowledge and address the work that the CJTF and other community militias have done to protect communities as well as the harm they currently cause. The Nigeria government – and its allies in the international community – must consider potential future risks the CJTF poses while addressing the underlying harms that contributed to its formation in the first place.