December 18, 2008By Center for Civilians in Conflict

KABUL – I was in Pakistan recently, looking at the situation of victims of conflict on the other side of the border. In the past few months, the number of US Predator strikes into the tribal areas of Pakistan from across the border in Afghanistan have skyrocketed. (See this Washington Post article). Pakistani army engagements with insurgents further north have led to an estimated 300,000 internally displaced persons (IDPs). The homes of many of those 300,000 IDPs have been destroyed in the fighting or aftermath.  No one could even tell me the number of civilians who might have been killed or injured in these operations.

In terms of help for these families, there’s a Pakistani government compensation fund, but it’s out of money. Those administering it can’t even get to many of the areas where there is active fighting to survey any losses or damage. There are also many international and government-supported aid programs, but with increasing numbers of IDPs, many for extended periods of time, they can’t even keep up with providing basic needs. 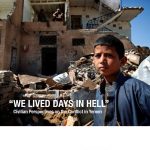