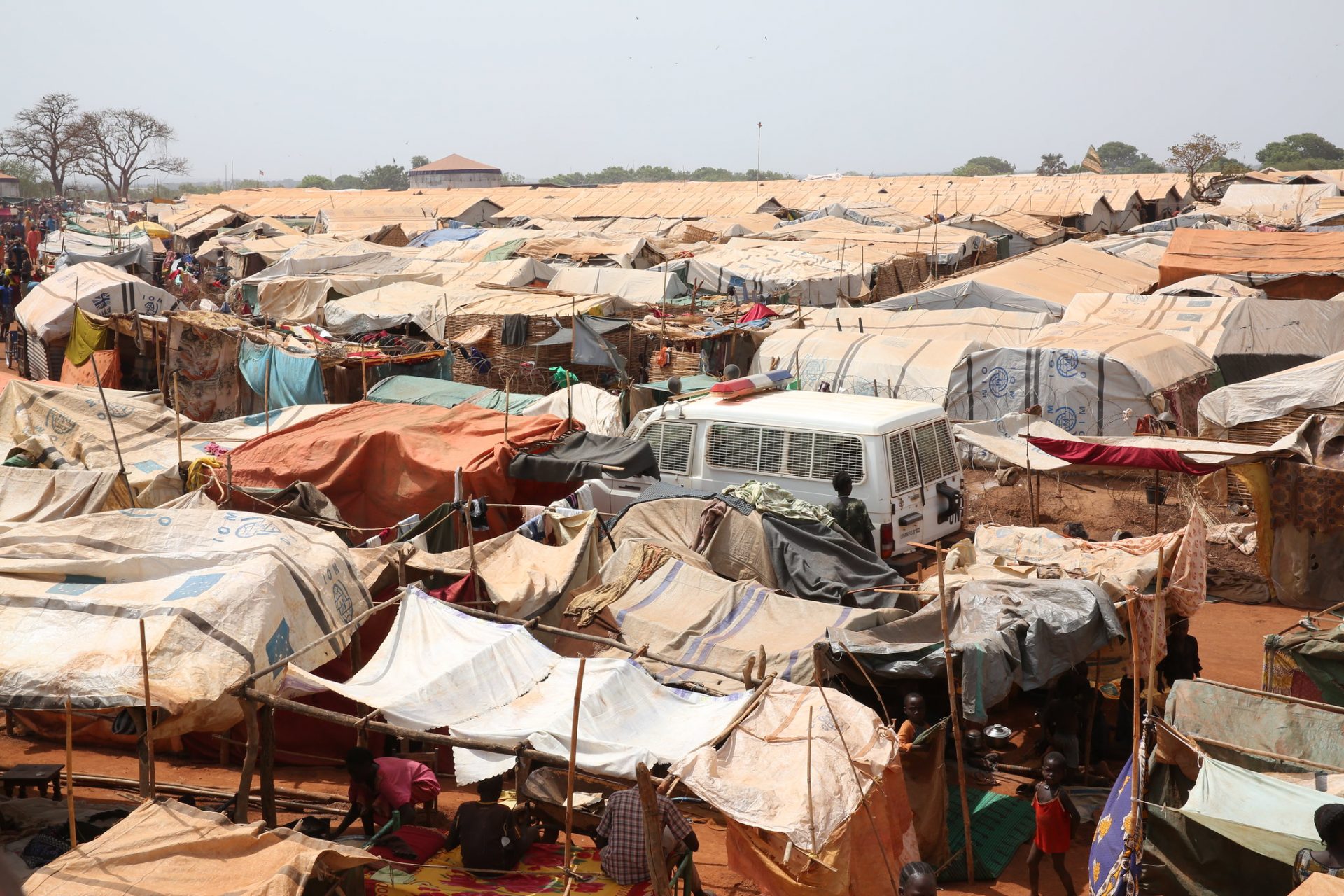 By Lauren Spink and Daniel Levine-Spound

Between November and December of 2020, CIVIC carried out interviews with civilians and civil society leaders living in Bor, Juba, and Wau in South Sudan. Up until recently, the UNMISS bases in each of these locations hosted a Protection of Civilians (PoC) site. The sites were created in 2013 when thousands of civilians fled to UNMISS bases to escape brutal attacks perpetrated during the country’s civil war. At their peak in 2015, the sites hosted more than 200,000 civilians – and were still housing over 189,000 individuals at the start of 2020. Because UNMISS bases are governed under a status of forces agreement (SOFA) brokered with the government of South Sudan, UNMISS has the right to refuse government and opposition officials or security forces access to the sites. However, the special status of the sites has meant that UNMISS has had to take on additional protection responsibilities that would normally fall to the state, and has had to protect civilians in the sites from targeted attacks by armed actors.

Since September 2020, UNMISS has re-designated the PoC sites in Bor, Juba, and Wau as traditional camps for internally displaced people (IDPs) under the primary responsibility of the government. In each of these three locations, CIVIC spoke with 15 civilians living in the former protection of civilians (PoC) sites, and 15 civilians, including civil society leaders, living in the surrounding towns. In total, CIVIC interviewed 90 individuals about their views on the current conflict dynamics in South Sudan, the decision to re-designate PoC sites, and how UNMISS could best contribute to protection and durable peace in South Sudan going forward – issues that are critical to the upcoming renewal of UNMISS’s mandate.

On March 15, 2021 the mandate of the United Nations Mission in South Sudan (UNMISS) will expire. On or before its expiration, the UN Security Council will need to approve a new mandate for the Mission to guide the work of its over 16,000 military, police, and civilian peacekeepers. In the weeks ahead of the renewal, Council members will review the existing mandate, consider shifts in the political and conflict environment, and debate how the text of the mandate should be adjusted. Ultimately, it is the lives of South Sudanese civilians that will be most affected by these decisions, and it should be the words and perspectives of South Sudanese civilians that guide the Council.

To help inform discussions on UNMISS’s mandate renewal, CIVIC carried out interviews with civilians and civil society leaders living in Bor, Juba, and Wau in South Sudan. In all three locations, interviewees asserted that they support peace, elections, security sector reform, enhanced accountability, transitional justice, and concrete efforts to reconcile communities. All of these elements are reflected in South Sudan’s revitalized peace agreement (R-ARCSS), and civilians felt implementation of the peace agreement would help address underlying conflict drivers and violence in the country, but lacked confidence that the R-ARCSS will be implemented. They pointed to corruption, repeatedly missed deadlines for implementation of different provisions in the R-ARCSS, statements by politicians that undermine rather than underpin peace, and a general lack of political will from the parties to fulfill commitments made in the agreement. “Peace is still very fragile and there are no concrete steps taken by leaders that can show we are in the right direction and peace is truly moving,” explained a Nuer woman living in a former PoC site in Juba.[1]  A Dinka woman in Bor town told CIVIC “I do not trust this peace agreement because it involves only leaders but not people on the ground like civilians and communities’ elders. Peace cannot be achieved from the top unless the grassroots is involved.”[2]

There has been a flurry of announcements from the South Sudanese government over the last several weeks—including renewed commitments to institute a Hybrid Court to try war crimes committed during the civil war and a new deadline for the formation of a transitional parliament. These announcements are designed to showcase progress, but South Sudanese politicians often make such pledges ahead of key deliberations by the African Union and the UN with little to no concrete change on the ground. Council members should be skeptical that these commitments will be respected in the absence of consistent high-level attention and political pressure by the region, the UN, and the Council. When considering UNMISS’s mandate renewal, the Council should instead: note the sharp increase in politicized subnational violence that took place in 2020; and heed the advice of a December 2020 Independent Strategic Review of UNMISS that predicted increased violence ahead of elections and advised that UNMISS’s troop ceiling not be lowered below the number currently deployed on the ground—approximately 15,000.

Since civil war broke out in 2013, protection of civilians has been the core focus of UNMISS’s mandate. Part of that protection mandate has been providing security to civilians in PoC sites. Civilians living both inside and outside of the Bor, Juba, and Wau PoC sites called into question UNMISS’s decision to re-designate the sites. Of greatest concern to these individuals was that re-designations took place before any significant progress reforming the South Sudanese security forces or integrating government and opposition military and police officers. A Nuer woman living in the re-designated Bor PoC site shared UNMISS’s explanation for the re-designation, along with her concern about the decision: “They said ‘it’s your government to protect you.’ We said it was the government that killed us.”[3] A second woman living in the re-designated Bor site whose three-year-old child was shot and killed during an attack on the PoC site in 2014 said, “In my opinion, what comes out of my heart, I am a citizen of the government but my government refused to protect me during the conflict. …Every day people talk about peace talks and it is not happening. …I do not personally trust the national police to protect the PoC site and my family. Last time the police were the ones targeting innocent civilians at the PoC site.”[4]

Similar views were also shared by civil society leaders and many other civilians living outside of the PoC sites who stressed that the national army, police, and intelligence services remain partisan entities dominated by members of ethnic groups allied to the President and with little accountability or training to address years of atrocities. A civil society leader in Juba speaking about re-designation of the sites said, “No, I don’t agree with this idea because the same government that killed her own people is the one given this task while security arrangements [are] not yet fully implemented.”[5] Likewise a Dinka woman living in Bor town told CIVIC, “I do not agree. …Peace should come first for people in the PoC to be handed to the government… because most of our national police are tribalists and they are the people killing civilians.”[6] A Balanda woman living in Wau town warned, “I don’t agree because full implementation [of the R-ARCSS] is not yet completed. If there is any war again, a lot of people will be killed because the security is very weak and there are no well-trained forces for that job.”[7]

It is true that many civilians who spoke with CIVIC also asked for UNMISS to reinforce protection of civilians outside of the PoC and IDP sites and that UNMISS has limited resources to implement its protection mandate in South Sudan. However very few UNMISS troops are actually tied down in PoC site protection[8] and as a 2019 CIVIC report concluded, enhanced mobility could allow UNMISS to increasingly provide protection to civilians further afield while still protecting civilians sheltered in and around UNMISS bases. Presently, all but two PoC sites have been re-designated and others are likely to soon follow suit. Going forward, UNMISS should maintain a flexible posture at the remaining PoC sites and at re-designated sites, develop contingency planning for protection of the re-designated sites if they come under attack, and be prepared to scale up their activities at the sites if needed.

While a long-term goal in South Sudan will be reforming the national security forces so that they are a source of protection for civilians rather than harm, a broad capacity-building mandate for UNMISS at the current stage would be premature and could be used to commit violations against the population and end up damaging the reputation of the UN. Civilians interviewed by CIVIC widely support UNMISS’s efforts to sensitize national authorities and security forces on human rights violations, including conflict-related sexual violence. For now, UNMISS should continue to focus on protecting civilians, building respect for human rights in South Sudan, and providing technical support and advice for the implementation of the peace agreement.

Finally, South Sudanese civilians who spoke with CIVIC endorsed a strong role for UNMISS in contributing to the protection of civilians, not only through physical protection, but also through dialogue and reconciliation activities. “UNMISS can play a big role in the reconciliation of the South Sudanese communities,” stated a woman of Bongo ethnicity living in the former Wau PoC site.[9] A Luwo Jur woman living in Wau town agreed, explaining, “There is a need for a national conference and then reconciliation and forgiveness which I think they are very important now because the tension is very high among the communities especially Dinka and Nuer and also Balanda. …Yes, I trust UNMISS can do that and only UNMISS because we have no trust in our leaders.”[10]