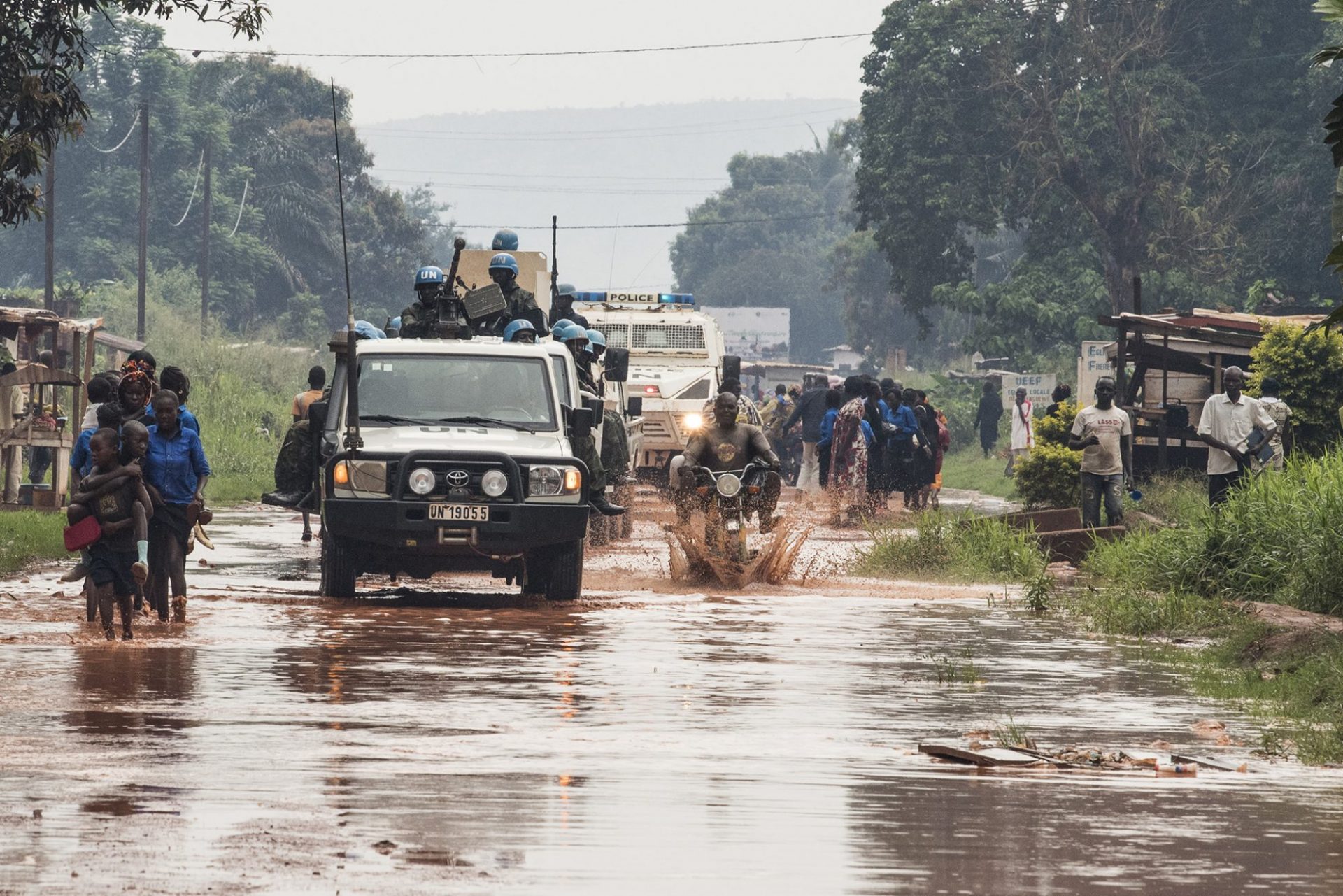 The UN Security Council voted today to extend the mandate of the UN peacekeeping mission in the Central African Republic (CAR), known by its acronym, MINUSCA. The adoption comes after more than one month of arduous negotiations among Council members, particularly France, the United States, and Russia, over varying political and financial issues with the draft resolution tabled by France in early November. The abstentions on today’s resolution by Russia and China mark a break in long-standing Council unity on CAR and the 11,700-strong UN peacekeeping mission that the world body dispatched to the country to protect civilians, restore state authority, and support the political process.

The break in Council unity may be new to 2018, but should be seen in the context of political and financial wrangling between Member States and the UN Secretariat that began in November 2017. The discord has significantly hampered MINUSCA’s already strained capacity to protect vulnerable civilians from violence, a task that the Mission has struggled seriously to accomplish since its deployment in 2014. Consecutive missteps in generating needed additional troops for MINUSCA, a flawed mission budgeting process, insufficient guidance from the UN Secretariat, and grinding political divisions among Council members have all contributed to preventing MINUSCA from receiving the resources and support needed to deliver on its immense mandate.

(Analysis continues below the timeline. An interactive version can be found here.)

On November 15, 2017, amid a rapidly deteriorating situation in CAR, the UN Security Council approved an additional 900 troops to be deployed to MINUSCA. The Council’s decision followed urgent calls for additional capacity from MINUSCA leadership, senior UN officials, and non-governmental organizations, who warned that the peacekeeping mission would not be able to protect civilians without more personnel and resources. The Council’s agreement to beef up MINUSCA with more troops was notable given the efforts of one of its permanent members, the United States, to impose strict budgetary belt-tightening measures on the UN and its peacekeeping operations. Earlier in the year, the United States forced extensive cuts on the UN mission in the Democratic Republic of Congo, and has sought to trim its overall contributions to the peacekeeping budget under the Trump administration.

On November 13, 2017, two days prior to the Council’s decision, the UN launched a special investigation into the mission’s response to attacks against civilians that took place in the south and east of the country between May and August 2017. One such incident under investigation occurred in the small town of Gambo, in southeast CAR, during which dozens of civilians and six local Red Cross workers were killed in a gruesome attack on a small hospital. UN peacekeepers from Morocco, reportedly positioned only 200 meters away from the hospital, did not respond to the attack as it unfolded. Deadly violence in Bria and Bangassou, which claimed hundreds of lives, was also part of the investigation. The UN released limited findings and recommendations in January, noting the mission faced “deficiencies” in responding to identified threats against civilians.

The two steps taken in November 2017 – a boost to MINUSCA’s capacity and an independent special investigation – were tangible moves to improve the mission’s performance in the face of escalating violence against civilians. Yet, more than one year later, political and financial wrangling between Member States and the UN Secretariat have resulted in significant delays in deploying the additional troops to MINUSCA. Deployment of the full 900 troops wasn’t expected until the end of November 2018 (more than a full year after the Council’s decision) because governments reneged on their pledges, turned down the UN’s appeals to contribute to the mission, or failed to pay their dues to the UN peacekeeping budget, which delayed other countries from contributing.

While the Secretary-General reported in October 2018 that 750 of the additional troops had deployed and the full 900 would be deployed by December, the head of MINUSCA recently stated in an interview that 350 of the additionally-pledged troops were still not in the country. While the full 900 troops are expected at some point this month, the delays in deployment have exacerbated already significant capacity constraints facing MINUSCA, which remains the only actor capable of protecting civilians in many areas of a country slightly smaller than Afghanistan. MINUSCA continues to operate below its authorized personnel ceiling, and notably lacks well-trained and equipped troops and police. The mission also seriously struggles with mobility, including a lack of helicopters to transport its personnel and ensure it can provide casualty and medical evacuation to its own troops and police.

As MINUSCA struggled to fill its capacity gaps in 2018, additional missteps continued in New York. First, in July, Member States in the UN’s Fifth (budgetary) Committee approved a budget proposal for the mission tabled by the UN Secretariat that effectively forced MINUSCA to reduce its civilian staff, such as critical human rights monitors and community liaison assistants, in order to accommodate the planned additional military personnel.

In October, following a strategic review of the mission, the UN Secretary-General made a recommendation to the Security Council to add three additional tasks to MINUSCA’s mandate – supporting the redeployment of national security forces, enhancing engagement in an African Union-led political process, and providing support for elections in 2020. The recommendation by the Secretary-General to add these tasks to MINUSCA’s 45 existing tasks did not come with sufficient advice or guidance on which tasks the Council could remove or streamline in the face of the serious capacity constraints facing the mission. The Secretary-General’s proclamation in March at a major Security Council session on peacekeeping reform that “Christmas is over” (a reference to the large Christmas-tree-like mandates given to peacekeeping operations by the Security Council) seemed not to apply to the mission in CAR.

In November, financial and political issues between major powers at the Security Council came to the fore in negotiations over the MINUSCA mandate renewal. First, the United States did not have the required Congressional approval to vote on the draft resolution tabled by France, given its desire to keep the mission operating “within existing resources” amid possible financial implications of the new mandated tasks. The inability of the United States to vote on the resolution forced the Council to seek a one-month “technical rollover” of the existing mandate. Second, the negotiations were embroiled in divisions between France and Russia, largely over Russia’s and Sudan’s political initiatives in the country, which are perceived as challenging an existing African Union-led political initiative already underway, and disrupting France’s and Chad’s influence in the former French colony.

As the UN and Security Council have prevaricated in New York, devastating attacks against civilians in CAR have continued throughout 2018, sometimes in close proximity to MINUSCA peacekeepers and bases. In the most recent incident, on November 15, the same day the Council approved a technical rollover versus adopting a new MINUSCA mandate, as many as 75 civilians were killed and 26,000 displaced when a site for internally displaced people was ruthlessly attacked. UN peacekeepers from Mauritania, positioned in close proximity to the site, reportedly did not respond as the violence unfolded. Despite recent warnings from the UN and humanitarians stating the high likelihood of significant violence against civilians in the area, there were only 40 MINUSCA personnel deployed in the town. This does not justify the inaction, but reveals the significant capacity gaps and structural flaws facing MINUSCA.

This September, the UN and 151 countries endorsed the Declaration of Shared Commitments on UN Peacekeeping Operations, part of Action for Peacekeeping, a major reform effort meant to improve UN peacekeeping. In the Declaration, which included 24 sweeping commitments, endorsers pledged to pass clear peacekeeping mandates, match these mandates with appropriate resources, and align political efforts in support of peacekeeping operations. The MINUSCA mandate renewal has been the first real test in translating these commitments into action, and the results have not been good. The process has laid bare the price paid by civilians in the Central African Republic as a result political and financial deadlock in New York and underperformance by an over-stretched and out-gunned UN peacekeeping operation deployed in a country still at war.