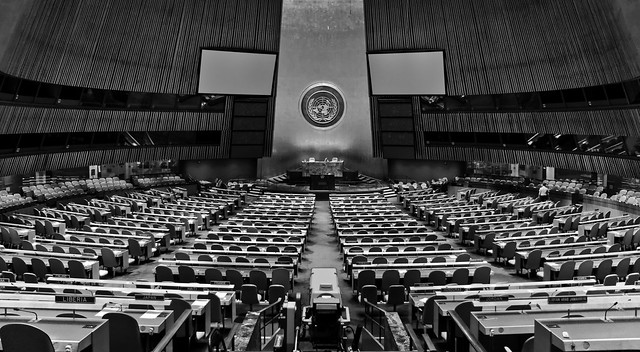 This piece is part of an ongoing series that marks the 20th anniversary of the UN Security Council taking up the protection of civilians on its agenda. Follow along here, on Facebook, and on Twitter as we mark this important anniversary year.

Starting today, world leaders will descend on New York for the opening of the 74th session of the United Nations General Assembly. In a flurry of diplomacy, events, and photo opportunities over the next two weeks, heads of state and government and their delegations will seek to address the crises of the day and shore up much-needed support for multilateralism.

The official opening of the General Assembly this year coincides with the twentieth anniversary of a seminal resolution adopted by the UN Security Council: Resolution 1265, the first-ever resolution adopted by the Council that specifically addressed the protection of civilians in armed conflict. The adoption of Resolution 1265 followed the protection of civilians being formally added to the Council’s agenda earlier that year, in February 1999. The following month, in October, the Council would also authorize the UN peacekeeping mission in Sierra Leone, UNAMSIL, with the first explicit mandate to protect civilians from the threat of violence.

To mark the anniversary of Resolution 1265, and as part of our ongoing #POC20 series, CIVIC is featuring articles by expert guest contributors that reflect on the importance of the resolution, and the broader effort to specifically focus on the protection of civilians in armed conflict at the Security Council that began twenty years ago.

The first piece, written by Leonie Arendt from the United Nations Office for the Coordination of Humanitarian Affairs, reflects on the adoption of Resolution 1265 and its role as a building block of the protection of civilians agenda that has developed at the United Nations over the past twenty years. (Read: #POC20: Twenty Years of Prioritizing the Protection of Civilians: September 1999 – UN Security Council Adopts First-Ever Resolution Focused on the Protection of Civilians in Armed Conflict)

The second piece, by Kelly Razzouk, Director of Policy and Advocacy at the International Rescue Committee, looks at Resolution 1265’s important but largely unfulfilled promise of promoting accountability for serious violations of international humanitarian law, looking specifically at the situation in Syria and recent attacks against hospitals and humanitarian workers. (Read: #POC20: As UN’s First Protection of Civilians Resolution Turns 20, International Humanitarian Law Is More Than Ever Under Threat)

Both pieces highlight the enduring relevance of Resolution 1265, and twenty years on, the need for the UN and its Member States to meaningfully translate the words in the text into concrete actions to protect civilians caught in the midst of conflict. As UNGA begins, world leaders would do well to reflect on this as they seek to address and resolve conflicts, like those currently raging in Afghanistan, Central African Republic, the Sahel region, and Yemen.

Stay tuned: Later this week, CIVIC will be publishing a report following a major policy dialogue it convened in July on the 20th anniversary of the protection of civilians agenda.