The world is experiencing more conflict and less peace than at any time in recent history.

From the Middle East and North Africa to Southeast Asia and Europe, an increasing number of regions are wracked by conflict, with civilians bearing the brunt of the violence. In densely-populated areas, including cities like Aleppo and Mosul, greater numbers of civilians are losing their lives, health, and livelihoods.

But there are solutions – and there is hope.

At a time when too few policymakers fully understand the complex sociopolitical dynamics underlying the violence, the Center for Civilians in Conflict (CIVIC) provides the research, analysis, technical assistance, and advocacy to create change. We work with armed actors and communities alike on the ground to give them the tools needed to safeguard civilians caught in the middle of conflict.

In the Central African Republic, for example, our in-country research and global advocacy helped lead to the deployment of 900 additional peacekeeping troops on the ground. In Afghanistan, following CIVIC’s technical assistance to International Security Assistance Forces (ISAF), the UN Assistance Mission in Afghanistan reported a 23% decline in civilian casualties attributed to ISAF.

CIVIC was founded in 2003 by Marla Ruzicka, a young American activist who successfully pressed the US government to make amends for civilians killed and harmed by US military operations in Iraq and Afghanistan.

In 2005, Marla herself became a victim of conflict when she was tragically killed in a suicide bombing while meeting with families in Iraq.

Through CIVIC, Marla’s legacy lives on.

We are proud of the progress we have made over the last 15 years. But we urgently need your help at a time when we are working to address more conflicts than ever before.

As we mark #15YearsofCIVIC, we ask you to help us reach our $150,000 emergency fundraising goal in 2018, the first $50,000 of which will be matched dollar for dollar through a generous grant from Countess Moira Charitable Foundation.

Whether you can give $15, $50, $150, or more, every dollar will help promote the safety of people living in the midst of war. Please donate today. 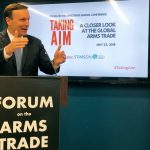 Alexandra South is the Development Director at the Center for Civilians in Conflict.