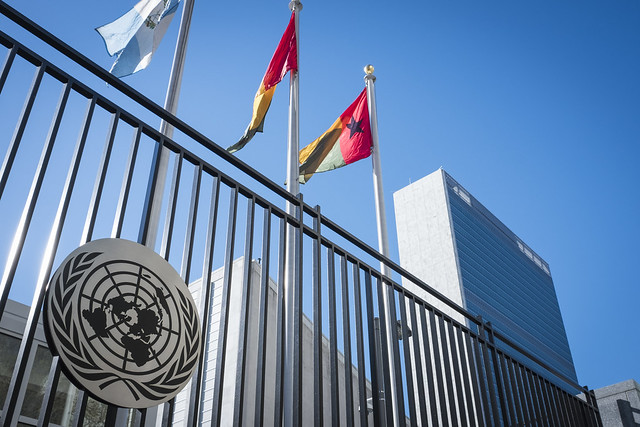 This is the seventh piece in a series that CIVIC is publishing throughout 2019 to mark the 20th anniversary of the UN Security Council taking up the protection of civilians on its agenda. This piece is a guest contribution by Kelly Razzouk, Director of Policy and Advocacy at the International Rescue Committee. Follow along here, on Facebook, and on Twitter as we mark this important anniversary year.

The United Nations Security Council’s first resolution on the protection of civilians (POC) in armed conflict, Resolution 1265, was adopted on this day twenty years ago. This seminal resolution first came to life for me almost ten years ago, while sitting in a law school classroom at DePaul University in Chicago.

I was captivated as Professor Cherif Bassiouni, often referred to as the “father of international criminal law,” lectured about international humanitarian law and the importance of the Geneva Conventions and Security Council resolutions like 1265. The arm of the law extends even to wars, Bassiouni would say, and even more important than the laws themselves, was the accountability for violators.

Professor Bassiouni would speak passionately about his time as head of the UN Security Council commissioned group of experts to investigate war crimes in Yugoslavia, particularly how the evidence collected would be used to hold perpetrators accountable so that justice could be sought for the victims.

As a young law student, I felt inspired and purpose-driven by these lectures. In the unimaginable chaos of conflict, there were rules and protections in place for civilians. There was accountability for those who violated rules.

These ideas were ingrained in Resolution 1265. The Council strongly condemned the deliberate targeting of civilians in armed conflict, and called on all parties to conflict to comply with their obligations under international law. The resolution further emphasized the responsibility of states to, “end impunity and to prosecute those responsible for genocide, crimes against humanity, and serious violations of international law.” Importantly, Resolution 1265 also reaffirmed the need to protect refugees and internally displaced persons, and called for “safe and unhindered access of humanitarian personnel to civilians.”

Yet, twenty years on from Resolution 1265, we are living in what David Miliband – CEO of the International Rescue Committee (IRC) – now calls the “age of impunity.” In this age of impunity, hope for unity among Security Council members to merely agree to condemn flagrant violations of humanitarian law is not guaranteed, and parties to conflict regularly target and attack civilians with no accountability.

Nowhere in the world is this more visible than in Syria, where hundreds of thousands of people have been killed over eight years of brutal war. In the last four months alone, IRC-supported health facilities in Northwest Syria have been attacked eight times, resulting in staff being killed or buildings damaged. Attacks against health facilities have become an unfortunate and deadly hallmark of the conflict.

Even mechanisms put in place to ensure protection of civilians have become tools used to target them in Syria. This is precisely what has happened with the “deconfliction list,” a list of hospitals and healthcare facilities maintained by the UN that is shared with the parties to the conflict.

Syrian doctors and healthcare personnel provided the UN with the coordinates of healthcare facilities, in the hope that these facilities would finally be spared, or barring that, that there would be some kind of accountability if “de-conflicted” facilities were attacked. Instead, those facilities have been bombed repeatedly – and with complete impunity – over the past several months.

A Syrian doctor I spoke to told me that severely wounded patients would come to the hospital to receive emergency medical care, but would often leave before being fully treated and return to their homes because they believed the hospital was the least safe place in the war-torn country.

Despite the global outcry, the UN Security Council has failed to take any meaningful action to investigate or hold anyone accountable for these attacks – as well as the carnage throughout Syria. Since 2011, Russia has used its veto a shameful twelve times to block Security Council resolutions aimed at protecting civilians in Syria.

However, General Assembly action is no substitute for the Security Council exercising its responsibility to maintain international peace and security.

In the absence of Security Council action, it becomes critical for the UN leadership to step in.  That is why the IRC called on the UN Secretary General to launch an investigation into the attacks on hospitals and health care facilities in Northwest Syria. We welcomed the August 1 Secretary-General’s announcement of a Board of Inquiry to investigate these incidents. In order for the inquiry to be credible, it must attribute responsibility to the perpetrators, and the findings of the report should be made public.

This would be a small but positive step for accountability in Syria. The best way to honor Resolution 1265 on the twentieth anniversary is to breathe renewed commitment into delivering on the protections for civilians under international law.

Clear support for accountability for flagrant violations will provide a deterrence for future violators and provide a modicum of justice to civilians and communities as they look to recover and rebuild post-conflict.

Looking towards the next twenty years of the POC agenda, we must ensure the world does not abandon the women, men, and children who make no choice to be part of conflicts that have erupted around them, as well as the brave humanitarian actors who choose to put themselves in harm’s way to reach them.

Kelly Razzouk is the Director of Policy and Advocacy at the International Rescue Committee.

CIVIC welcomes contributions from around the world to provide insight on the civilian experience of conflict and importance of promoting better protection.